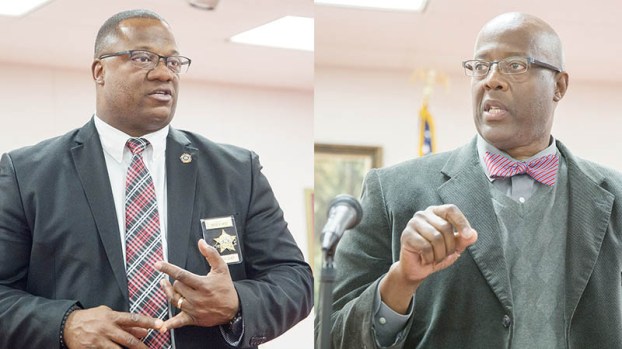 AHOSKIE – The headlines on mass shootings have become increasingly common — and worrisome.

Last November, it was an attack on First Baptist Church in Sutherland Springs, Texas, where a gunman came in with a rifle during a Sunday morning service. He shot and killed 26 people.

It was not the first such attack.

More than 400 people have been killed in various houses of worship across America since 1999. And 135 of these incidents were in Baptist churches, more than any other denomination.

Increasingly, churches are asking how they can be safe. What should they do when the unthinkable happens?

Be prepared: It could happen at your church

Current events and a heightened interest in church security was the background for a recent conference on church security which drew more than 80 Baptists to West Chowan Baptist Association’s building in Ahoskie. Similar events have taken place across the state and across the country following November’s shooting in Texas.

West Chowan’s Director of Missions Terry J. Stockman Sr. said he organized the conference in response to numerous questions on church security from the association’s 61 churches. Helping churches make disciples is his main assignment, he said, “but we must also be aware of security concerns that can come up and be good stewards.

Thankfully, no violent attacks have occurred in West Chowan. But Stockman said churches should take preventive steps before an attack happens. “We want to get people on guard before something bad happens,” he said.

Stockman invited sheriffs from three counties and a church insurance representative to speak and to field questions. One sheriff could not attend.

Hayes said law enforcement officials in all of North Carolina’s 100 counties have access to solid security recommendations from federal sources, and most will be willing to help churches evaluate security procedures, such as checking building entrances, lighting and the like.

Hayes said tailoring security procedures to individual churches is important, because churches vary in number of members and in the number and size of their buildings. Across North Carolina, some Baptist churches own their buildings while others rent space. The Baptist State Convention of North Carolina helps plant more than 60 new churches a year, and many of these start by meeting in public schools. 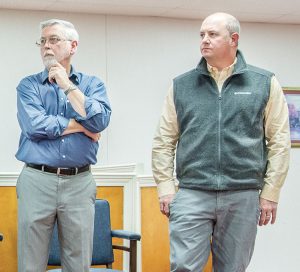 Terry Stockman (left), WCBA Director of Missions, joins with Church Mutual Insurance representative Jay Hinton as they listen to the advice from the two sheriffs.

But the two law enforcement officers presented solid advice that helps on getting started. Many of the security steps will help deal with natural disasters, fires and other situations that do not involve shootings.

Sheriff Hayes said churches must consider security for all its activities, not just the Sunday services. Shooters most often attack “soft targets,” or smaller, more vulnerable groups. He cited the shooting at a prayer meeting Emanuel African Methodist Episcopal Church in Charleston, S.C., which left nine dead, including the pastor, on June 17, 2015.

Whether it’s a prayer group, Bible study group, or a few people working on the church food pantry, Hayes said, “That’s when the subject will come and try to do harm.”

Churches should have a trained team of people focused on security, Hayes said. Arrange for a limited number of people to carry concealed firearms. It would be best to enlist people with law enforcement or military experience, “so they won’t freeze in an emergency,” Hayes said.

Have someone familiar with members and the area to watch the doors so potential troublemakers can be watched. He noted there needs to be a balance between welcoming visitors, which churches want, yet keeping security in focus.

Once a security team is designated, the church needs to practice repeatedly so people will know what to do in a crisis. Someone should be designated to call 911 and give clear information about what is happening, starting with the church address. The church should provide training and preparation for lockdown situations, with safe areas where people can take shelter until law enforcement arrives.

Elderly or handicapped members should be seated near exists so they can be evacuated more quickly in a crisis.

Churches should have first aid supplies on hand that should include tourniquets to stop bleeding.

Have someone keep watch on the outside grounds. Inexpensive walkie-talkies work more quickly than cell phones, whose many features can slow down calling.

If someone carrying a weapon or, say, someone wearing a long, black coat when it’s 100 degrees, those outside security team members can alert the church, which can then be locked down.

Sheriff Holley said if he and his deputies come to the church to deal with an active shooter.

“We come in first to take out the shooter. We’re here to kill him. The deputies might go right past you bleeding on the floor, because their first duty is to stop the shooter. As long as the shooter is in the building, he’s still a big threat. He may be trying to kill as many people as possible,” Holley explained.

“These things are very serious. We put our lives on the line every day,” he said.

Holley said his officers went through a very difficult training event a month ago in which the weapons actually fired — the bullets were non-lethal, but painful if they hit you. One woman passed out from her fear and anxiety, though it was only training.

“You cannot tell how a person will react in an emergency situation,” Holley said.

Hayes said if law officers arrive in an active shooter situation, “Don’t be waving a gun around! It’s unhealthy.”

If your church has Wi-Fi, churches can get more police presence by providing the password to local officers. That could lead to having deputies parking in the church parking lot all hours so they can fill out their online forms — a boost to security.

Both Hayes and Holley are Christians and members of area churches. Holley serves as minister of music at his church. One conference participant praised Sheriff Holley because all his department cars now carry the phrase “In God We Trust” on the back.

Preparing to be secure: What to do

Want to make your church secure? It will take more than one meeting. Security experts urge churches to identify security as one of its ministries, a never-ending effort to keep members and visitors safe. Security should be coordinated with local law enforcement and tailored to each church’s situation.

As other ministries, security must be planned and staffed, with established procedures to follow.

The Brotherhood Mutual Insurance Company provides a good overview on preparing for church security on its web site. Learn more at brotherhoodmutual.com/resources/church-security.

The link provides access to a manual titled, “The Church Safety and Security Guidebook,” which received praise from Rit Varriale, pastor of Elizabeth Baptist Church in Shelby. Varriale speaks with authority since he served as a U.S. Army Ranger with the 82nd Airborne Division.

Varriale was considering writing a book on church security, but decided not to after seeing Brotherhood Mutual’s material. He said their guidebook “is the most comprehensive text on the market.”

“What sets this guidebook apart from the rest is its practical advice for developing — in conjunction with local laws and regulations — Standard Operating Procedures for everything from basic first aid to active shooter situations,” Varriale said.

“It’s important to note that safety teams should train regularly for the more anticipated emergencies, such as health and first aid issues, and not just the worst-case scenarios.”

(Mike Creswell is a senior consultant for the Baptist State Convention of North Carolina.)