MERRY HILL – A five RBI day for Lauren Baker on the softball field and efficient pitching from Sawyer Mizelle on the other diamond helped Lawrence Academy triumph over Terra Ceia Christian, 23-3 in softball and 16-5 in baseball here Thursday afternoon.

Baker would not be denied at the plate driving in five runs on three hits. After stealing home twice in the first inning, her RBI’s came on a two-run double in the second, a single in the second, and another two-run two-bagger in the third. 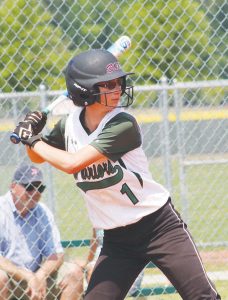 when Gracen Rogers drew a walk and came around to score the first run, after which the floodgates opened. In the second inning the offensive onslaught came from singles by Megan Davenport, Baker, and Rogers, home runs by Katlynn Stotesberry and Isabella Conigliaro, and a double by Baker.

Stotesberry toed the rubber for the Lady Warriors with just one inning of work allowing no runs and no hits while striking out one and walking zero.

Emily Roscoe took the loss for the Lady Knights, she went one and two-thirds innings, allowing 18 runs on five hits and striking out two.

The Warriors had 11 hits in the game. Baker was the leader with three hits in three at-bats. Davenport, Rebecca Goodwin, and Stotesberry also each racked up multiple hits.  Goodwin also had five stolen bases, as they ran wild on the base paths with 22 stolen bases total.

After falling behind 2-0 in the first inning, the Warriors scored eight runs on a single by Dylan Harrell, a single by Owen Price, a single by Brian Hughson, a walk by Sawyer Mizelle, and two errors in their half of the first and lead 8-2.

Mizelle was the winner on the mound for the Warriors. He surrendered five runs on five hits over two innings, striking out two and walking none.

Johannes Van Essendelft went two innings for the Knights allowing 14 runs on nine hits and striking out one.

Omarion Blount went 2-for-3 at the plate to lead Terra Ceia.