Ahoskie: A tale of two cemeteries

AHOSKIE – Nestled on this elevated land and tucked amongst the dried leaves, periwinkle, ivy, vines, magnolia, pine trees and various flora rest the dead of long ago.

While to many of the townspeople it is just a meaningless space of land. One thing is for sure, it was one of the first public resting places for this community to lay to rest its deceased people of “color”. 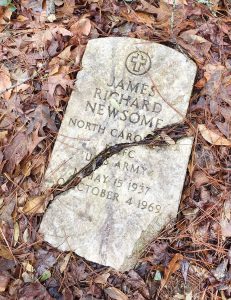 Even the disease of racism sorely found its way into this cemetery as thousands more like it undoubtedly across these United States.

The original ownership and how this section of the property became a cemetery remains unknown. Records have not been found yet to determine how the cemetery was started.

The Basnight family was known to be benevolent to African-Americans and their churches in this manner. They allowed my great-grandmother, Jane Parker Vaughan, to be buried in this cemetery on December 31, 1970. I recall that cold, raw and damp December day, just a few days past Christmas. The grave diggers and undertaker initially had some difficulties accessing the cemetery. The land approaching it was also privately owned. Permission had to be granted to enter the muddy path that led to the entrance of the cemetery. After passing this sort of checkpoint, there was another stumbling block. The entrance to the cemetery was actually gated and required unlocking. Again, permission was needed.

For the African-American community, some of our ancestors can be located and some cannot be found within this abandoned and all but forgotten cemetery. A few of the graves are adorned with marked headstones like the one that reads “They Now Sweetly Rest” and at least three bear military headstones with the emblem of the cross; others with a cement slab and identifiable insignia of name, birth date and death date. A handful are protected with makeshift cement slabs, yet some are covered in earthen dirt, while others have succumbed to years of exposure to the elements and all that is left is the sunken shape of what is a grave.

One couple who lie reposed beside each other are Mr. James T. Lewis and Mrs. Annie Tempie Lewis. Their graves are fortunately visible on the approach to a cluster of gravesites.

According to county records, Mr. Lewis was born on March 18, 1865. His birth was just a few weeks before General Robert E. Lee surrendered to General Ulysses S. Grant and the Union Army at the McLean House in Appomattox Court House, Virginia on April 9, 1865. This event signaled the end of the bloody and destructive United States Civil War.

Mr. Yancey Moore was a private in the Army and served in World War I with the 808 Pioneer Infantry. According to county records, Mr. Moore was born on October 15, 1891, served his country, came home and worked at historic Waters Training Institute (now C. S. Brown School) in Winton, and died on February I, 1959. 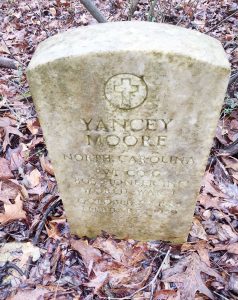 The third headstone belongs to the gravesite of James Richard Newsome. Mr. Newsome was born during the spring, on May I5, 1937. His was a short life. On the autumn day of October 4, 1969 and at the age of 32, he died.

The three veterans lived during the “Jim Crow’ era.

In contrast, directly across on the north side of the street can be found a park like cemetery, manicured with brick entrance pillars, magnolia trees evenly placed, neatly plotted graves, mausoleums and paved driveways. This cemetery some years ago was distinctly a burial ground for “whites only” or “European Americans” and owned by the Town of Ahoskie. After all these years, I do not know if any African-American person is buried within these grounds.

My initial interest in the “Old Colored Cemetery” began me on a quest to locate the gravesite of my great grandmother Jane. I found much more. Instead it took me on a journey to reflect on the lives of a few of the individuals who share a resting place with my great-grandmother, their contributions to our community and nation.

Finally, it made me reflect on the history of racism and how deeply rooted this disease can be found in every institution of our nation. It sadly followed my great-grandmother and many others from the day of their birth (the cradle) to the day of their death (the grave).

By the way, I am still in search of my great-grandmother Jane’s gravesite.

If you have information about this cemetery, interested in restoring it or have questions, please write me at: