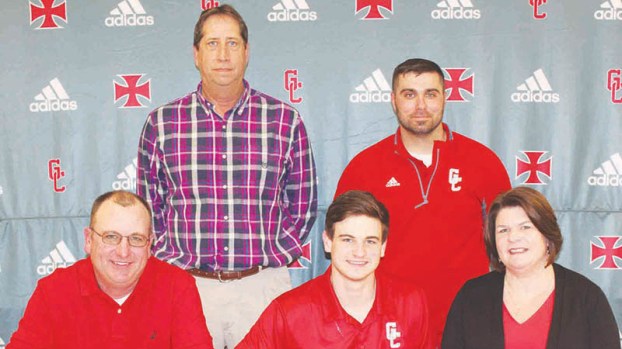 “It’s a great place, only a couple of miles from James Madison University,” Riddick said. “The big thing for me was they had my degree (Health & Physical Education) and minor that I wanted, which was in Coaching.”

EMU, a member of the Old Dominion Athletic Conference, wasn’t the only school in that league recruiting Riddick; he also was in the sights of Randolph-Macon College, while the other school on his short list was Methodist University. But when the time came to choose, EMU was an easy call.

“They recruited me hard the past two years, the past two summers, and the coaches (head coach Ben Spotts and recruiting coordinator/asst. coach Adam Posey) communicated with me a lot,” Riddick acknowledged. “They just seemed to want to establish a close, personal relationship with me.”

The tall right-hander (6’3”, 185 pounds) said despite such ardent courtship, the EMU coaches made no guarantees. Whatever he gets at the school, he knows he’ll have to earn it.

“They said I should be in the mix of having an opportunity,” he noted. “They said fulfill the opportunities that are put before you and then I should be able to have success.”

While Riddick’s pitching prowess turned the coaches heads – he figured in seven of 12 starts for the Red Barons last season – he thinks his best shot to get on the field would be as an outfielder.

“Right now, they think I would be a middle reliever on the mound,” he said. “But where I really want to fit in is in the outfield.”

This summer, Riddick hopes to follow a summer workout plan that probably includes another season of American Legion baseball with Ahoskie Post 102 and he’ll also work a summer job.

“I’ll be checking in with Coaches Spotts and Posey about the workout plan for whenever I can get that for fall workouts leading into the spring of next year,” he anticipated. “When I get there I want to be ahead of the game instead of being everybody else; I want to be out front.”

Riddick says the next phase of his student/athletic career means he’ll have to ‘live and breathe baseball’. He also knows what it’s going to take mentally.

“You can’t be afraid to sacrifice,” he asserted. “Sure it’s tough to give up that time with your friends, but I can’t worry about that. Grades will have to be first, and then baseball will come next. That’s why I want to go to school there.”

Riddick feels he also has to prepare his body for the rigors, physically, of being a college athlete.

“I want to get my legs as big as I can get,” he said. “You’re not getting stronger, you’re getting better because champions are made in the weight room and when you put in the work there, it translates to work on the field.”

Riddick plans to put in that hard work in the weight room.

“When the opportunity’s placed in front of you, you have to get it, take it, and run with it,” he maintains. “My sophomore year will be more of the same, and if everything works out and I don’t get hurt and other things, then I hope to be.”

Riddick’s prepared for the role of a lowly freshman ball player. Not only will he get a chance to advance academically, but he also can make his mark in other ways.

“If my role is to sit out my freshman year, then I’m going to help the team in other ways,” he said. “I just want to do what I can to make the team better; just be an asset to the team, because that’s how it should be: team first.”

First on Riddick’s list of priorities is helping the Royals win the Old Dominion Athletic Conference crown and then make a deep run in the playoffs before getting a crack at the NCAA Division-III World Series. As for personal honors like All-American and the like; then they’ll just have to wait.

“Those types of things take care of themselves,” he remarked. “If you start to think about them then you’re not going to get them because you’re thinking about them all the time. If you do that, you put too much pressure on yourself and you can’t really enjoy the game.”

Riddick doesn’t shy away from pro baseball aspirations, but there are other options he feels must come beforehand.

“I think I’ll take my chances and go to college for a few years and see how that works out first,” he replied when asked about the June Major League Amateur draft. “Then if my draft status doesn’t go up, I’ll get my degree first and go that route. It’s a dream of mine, but that window of opportunity gets smaller for everybody and if God grants it for me, I’m going to take advantage.”

Finally, don’t expect Riddick to stray too far. He says he’d like nothing better than to take over for Harrell coaching the Red Barons baseball team.

FAIRMONT – Under pressure. Hertford County surprised Fairmont High School with a taste of its own medicine by coming out... read more