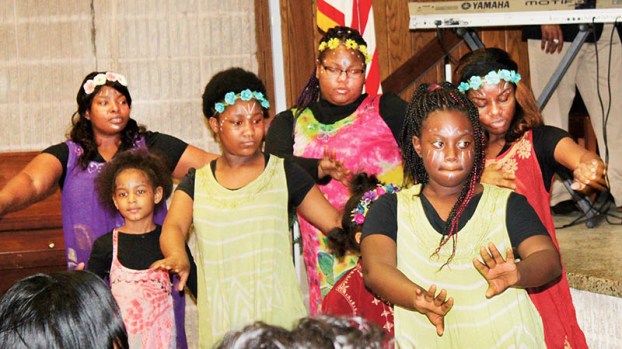 AHOSKIE – It was an evening of singing, dancing, and most importantly, reflecting on the past. Roanoke-Chowan Community College hosted their Black History Month celebration here Wednesday night with a theme of “African Americans in Times of War.”

The guest speakers were Fred Yates, retired Marine and current mayor of Winfall, NC, and Congressman G.K. Butterfield, North Carolina’s First District representative in Washington, DC. They were also joined during the event by song and dance performances that celebrated the importance of religious faith.

“I joined the Marine Corp in 1953,” said Mayor Yates as he stepped up to the podium.

Yates spoke of his experience serving as a Marine while segregation was still in effect, mentioning memories of having to move to the back of the bus whenever he and his friends left the base at Camp Lejeune.

“This is a praying time,” Yates said as he concluded his speech, urging people to hold fast to their faith even when times are tough.

An interlude between speeches gave the audience a chance to enjoy two lively performances. Johnny Ruffin, a student at the community college, 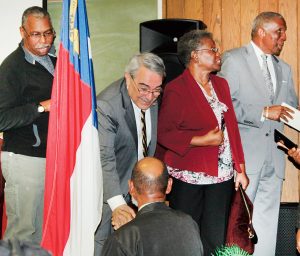 sang an energetic rendition of hymn “One Day at a Time” while encouraging the audience to clap and sing along. The Nebo Baptist Church Praise Dancers followed with two different routines. The group of children and teens used colorful garments and props to enhance their message through dance.

Congressman Butterfield then took the stage to deliver the keynote address of the night.

“When I was a younger man,” he began, “it was called Negro History Week. But as the years went on, it evolved into Black History Month. It is a very, very important time for all of us to reflect and to celebrate. You cannot understand the present without understanding the past.”

Butterfield summarized many important moments in Black History that took place between 1830 and 1965. He touched on topics such as free people of color living in the South before the Civil War, the focus on providing education to rural African Americans, and the impact of the Voting Rights Act.

“They were very caring and compassionate about their fellow man and their fellow woman who were still in slavery,” the congressman said on the little-known history of free people of color living in the South. “So what they started to do was very secretly teach the slaves to read and write.”

Unfortunately, Butterfield explained, the North Carolina legislature eventually passed a law to make it illegal to teach or preach to slaves. The penalties for breaking the new law were so severe, many people stopped their lessons.

He continued on by acknowledging the events surrounding the Civil War which led up to the passing of the Thirteenth Amendment. Once it was ratified by Georgia in 1865, all slaves in the United States became free.

An emphasis on education began during the Reconstruction period, Butterfield explained, especially after the state’s legislature instilled the literacy test requirement to vote in 1899, which barred many African Americans from the polls. Butterfield cited Calvin Scott Brown—better known locally as C.S. Brown—as one of the advocates for education, particularly in Hertford County.

Butterfield concluded his speech with a brief history of how the Civil Rights Act and the Voting Rights Act came to pass in the 1960’s through protests and activism.

The program wrapped up with everyone in attendance singing a rousing rendition of James Weldon Johnson’s familiar hymn “Lift Every Voice and Sing.”

WINDSOR – The Windsor/Bertie County YMCA announced the presentation of a $5,000 check from Perdue Farms of Lewiston-Woodville, awarded through... read more