After a checkered season in which her play has been erratic, Lawrence Academy’s Lauren Baker seemed to re-capture the form that made her the reigning Tarheel Independent Conference Player of the Year.

It came Tuesday night in the Lady Warriors’ 48-24 win over Terra Ceia Christian School in the quarter-final of the TIC Tournament, hosted by Ridgecroft School. 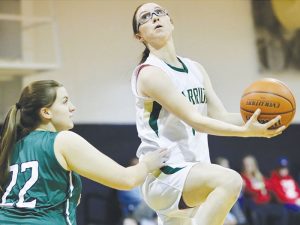 The Lady Warriors dominated from tip-off to final horn as they powered their way to the second round. Baker led the way with a 20-point effort.

LAW controlled the first quarter as Gracen Rogers drove to get a lay-up for the game’s first points. Baker followed with the next seven in a row before Lynn Van Staalduinen finally broke through for the Lady Knights with a free throw. The quarter ended with Lawrence in front, 11-1.

Baker got two more quick lay-ups for a 15-1 margin. Lauren Smith then scored back-to-back buckets before TCCS finally got their first field goal with 2:30 left in the half on a put back by Ashley James. It was all the Knights could muster, and they went to the locker-room trailing by 20 points, 23-3.

After Baker opened the second half with a long-range three-pointer, Terra Ceia got its first back-to-back baskets, but they still trailed by 19 points, 26-7. After Lindsey Smith made one-of-two free throws, the Knights finally got a run going, but were doubled-up when the third quarter horn sounded, down 34-17.

They remained doubled-up all the way to the final whistle. Savannah Stevens came through with a pair of field goals in the fourth quarter, but Baker was still on the loose and finished the game with two more lay-ups for the 24-point margin of victory.