AHOSKIE – A Murfreesboro was arrested here Monday on an outstanding warrant in Pitt County for attempted murder and other charges. He was also charged with three misdemeanors on a Hertford County crime.

Latroy Ramon Outlaw, 24, who lists an address on East Fairview Drive, was arrested by the Ahoskie Police Department and Hertford County Sheriff’s Office after the APD received information that he was at a residence on Colony Avenue in Ahoskie. 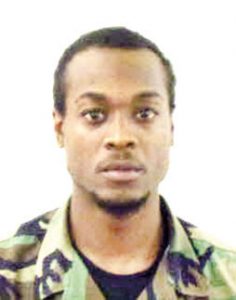 Hertford County Sheriff Dexter Hayes said after he was contacted concerning Outlaw’s whereabouts, he sent two of his deputies – Investigator Chase Oliver and Sgt. Tyrone Ruffin – to Ahoskie. There, they joined with APD K-9 Sgt. Clifton Whitby and Officer Bryant Fletcher to set up surveillance on the residence.

“The officers spotted the suspect outside the residence and were able to take him into custody without incident,” Hayes said.

In Hertford County, Outlaw was charged with two counts of communicating threats, and one count each of assault on a female and injury to real property. Those arrest warrants were drawn on Jan. 14.

The Pitt County arrest warrants were served on Outlaw at the time of his arrest on Monday. Those charges include felony assault with a deadly weapon with intent to kill by inflicting serious injury; felony armed robbery with a dangerous weapon; felony sell and deliver cocaine; felony sell and deliver marijuana; and misdemeanor possession of drug paraphernalia. The arrest report did not include information on the dates of the alleged crimes in Pitt County.

Outlaw was jailed on a combined secured bond of $136,000. He is scheduled to make his first appearance in Hertford County District Court on Feb. 14.

Hayes added that Outlaw also had two outstanding arrest warrants in Hertford County for selling cocaine and selling marijuana. Local law enforcement officers attempted to serve those warrants back in December as part of “Operation Lockdown” – a multi-agency effort – but were not able to locate him at that time.

“This was an outstanding effort between my deputies and the two Ahoskie Police officers who worked together to take a violent offender off the streets,” Hayes noted. “We are also very appreciative of the tip we received as to Mr. Outlaw’s whereabouts. We encourage our citizens to become involved in that way as it takes a community-wide effort to fight crime. We welcome those types of calls.”

“All of the officers involved in making this arrest are to be commended for the way this was handled,” said Ahoskie Police Chief Troy Fitzhugh. “You never know how arrests of violent criminals will turn out. Fortunately, no one was injured.”

Outlaw has a prior criminal history in Hertford County. He was arrested in 2010 for assault on a school official and in 2011 for simple assault and communicating threats. Outlaw served a period of probation in both those cases.

Last of a series MURFREESBORO – Last week a multitude of professionals from all over northeastern North Carolina gathered at... read more