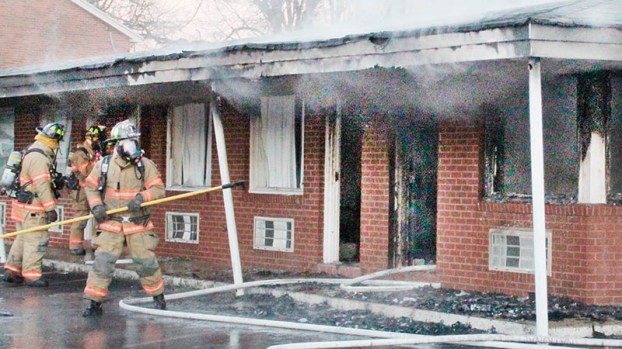 Firefighters from Ahoskie and Winton battled a Sunday afternoon blaze at the Tomahawk Motel, where 12 rooms were impacted in one of the buildings on the property. | Staff Photos by Cal Bryant

AHOSKIE – The owner of the Tomahawk Motel here is praising the response and efforts of the Ahoskie Fire Department for keeping his business open.

A late Sunday afternoon fire caused extensive damage to one of the buildings at the motel, located on Academy Street. However, Tomahawk owner Braxton Smith told the Roanoke-Chowan News-Herald that the firemen, “went the extra mile to keep me in business.” 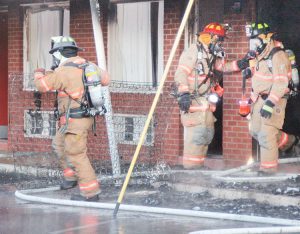 A fireman removes a scorched mattress spring from room 269, from where the blaze started.

“Those guys never get the praise they so richly deserve,” Smith said of the local firefighters. “For starters, they arrived at the scene in just a matter of a few minutes and were able to quickly contain the fire to just one building.”

It’s what happened after that effort which has Smith offering his high praise.

“I understand protocol at a structure fire….the electricity must be cut off, and that’s what happened here,” Smith explained. “But those guys, the firemen, understand that I operate a hotel and folks depend on me to be open, 24/7/365. Once they put the fire out and isolated that one building, the electrical power was restored to the remainder of the buildings. They saved my business as we had guests in those rooms.”

Smith added that water was also quickly restored to the other buildings.

“They figured out a way to isolate the water line to the damaged building and were able to only shut off that one line,” he stressed. “Those guys are simply amazing.”

And what was more amazing to Smith is all of the above was accomplished prior to his arrival in Ahoskie from his home in Little Washington.

“I think I may have broken a few traffic laws driving to Ahoskie after I was notified at home about the fire,” he admitted. “I made it here in just about one hour and everything was back up and running at the Tomahawk other than the one building. I thank the Ahoskie Fire Department for what they did….they did a wonderful job.”

“The fire began in room 269, which was occupied by one individual,” Bradley said. The two adjacent rooms also suffered fire damage, but neither was occupied.”

Bradley added there was fire damage, “all across the attic area of that one building.”

The cause of the blaze is undetermined at this time. Ahoskie Police Lt. Jeremy Roberts is investigating the cause.

Smith stated he was scheduled to meet today (Tuesday) with his insurance company. There is no timetable when the impacted building will reopen.

“I just want everyone to know that despite the fire, the Tomahawk Motel is up and running,” Smith said.

The fire was reported at 4:56 p.m. Sunday. Ahoskie (Fire Stations 1 and 2) dispatched a total of five units and 26 firefighters to the scene. Winton Fire Department assisted, sending three units and 11 firefighters.

GATESVILLE – For the first time in nearly three years, the Gates County Sheriff’s Office has a murder investigation on... read more