The cab of an 18-wheeler caught fire at the intersection of Academy and Main streets, and the resulting fuel leak took all day to cleanup.

Ahoskie Fire Chief George Michael Bradley said the driver of the 18-wheeler, owned by Dairy Movers of Greensboro, was headed north on Academy Street (US 13) at around 3:30 a.m.

“He said the truck’s engine stalled out as he was passing the Church Street intersection,” Bradley said. “He coasted into the parking lot of Speedway (convenience store; one block away) and when he got out of the truck he noticed a fire under the hood.”

The truck was not loaded with any dairy products and the driver was not injured.

Bradley said two units from Ahoskie Station 1 and one unit from Station 2, with 15 total firefighters, were dispatched to the scene at 3:34 a.m. 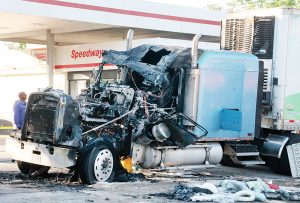 The cab of this 18-wheeler, owned by Dairy Movers of Greensboro, was destroyed when the engine caught fire Friday morning while passing through Ahoskie. | Staff Photo by Cal Bryant

“The cab of the truck was fully engulfed upon our arrival,” Bradley said. “The fire was rolling nearly as high as the power lines overhead.”

Bradley noted that the fire was contained quickly, but the blaze had burned the fuel lines in half, causing a diesel spill.

“We were able to quickly erect a dyke around the diesel fuel, contain it, and kept it out of the street and the storm drains,” Bradley stated.

Due to the fuel spill, Bradley followed protocol and contacted a private Hazmat contractor to come to the scene for the proper cleanup.

“Eastern Environmental Management out of Rocky Mount came to the scene and performed the cleanup work, to include a sweep of the storm drains as a precautionary measure,” Bradley said, adding their effort took until late Friday afternoon to complete.

The Ahoskie Fire Department cleared the scene at 11:26 a.m.

There was no damage to the Speedway store, which opened for business later Friday morning.

The cause of the fire is underdetermined.

Bradley said he wishes to thank the Ahoskie Police Department and Hertford County Sheriff’s Office for their assistance with traffic control.

“The fire scene was in an area of town that is typically busy with traffic all day, but especially in the morning hours,” he said.

POWELLSVILLE – Help is on the way. After a series of criminal incidents around the town, primarily home invasions, the... read more