AHOSKIE – A growl and a groan.

The groan was for the fighting spirit of the Red Barons trying to blunt the onslaught.

It ended with Hertford County claiming a 34-6 win.

The Bears opened the contest going 84 yards in eight plays for the night’s first score. It came before a modest crowd of fans for both teams who turned out one night ahead of the regularly scheduled game due to a threat of rain on Friday.

With senior running back Kyeem Perry burning up yardage on the ground, the drive was capped when fellow-senior quarterback Lance Hunter hit receiver Zion Riddick with a 26-yard scoring strike and a 6-0 Hertford County lead. Evan Lassiter booted through the extra point and it was 7-0, Bears, at the 9:05 mark. 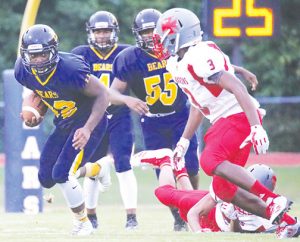 The Red Baron defense held its own for the remainder of the first 12 minutes, and the Bears only had the seven-point lead headed to the second quarter.

In the second, Gates County’s Jayden Bond recovered a Bear fumble for the ‘Barons on the Hertford County 25 yard line, and four plays later Ron Olsen scampered in from 15 yards out to pull the ‘Barons within a point at 7-6 with 9:24 left in the half.

But the Bears struck back a mere 22 seconds later. Deep in their own territory at the 10-yard line, Hunter hit Riddick for the pair’s second hook-up of the night – a 90-yard strike over the middle good for another six points and the Hertford County lead bulged up to 13-6.

The Red Barons didn’t hold onto the ball for long. On their next possession, Hertford County’s Tristan Williams recovered a fumble on the Bear 46-yard line. Hunter then directed a 54-yard drive in five plays with Perry doing all of the damage on the ground, ending with a two-yard plunge into the end zone for the score and a 19-6 lead. Lassiter’s kick made it 20-6, which held up thru halftime.

Following a scoreless third quarter, Gates County was forced to punt early in the fourth. That’s when Hertford County went 55 yards in seven plays for the Bears’ fourth score of the night. This time Riddick got his third six points of the night, rushing in from 10 yards out, and with the Lassiter kick it was 27-6 with less than 10 minutes left in the game.

Gates then surrendered the ball on the ‘Barons’ second fumble of the night. This time Qyshaun Chism fell on it at the Gates County 30-yard line, and on the first play Hunter tossed his third touchdown pass of the night – a floater to Perry that was good for the Bears’ last six points of the evening. Lassiter’s kick made for the final score, 34-6, Hertford County.

Hertford County racked up a whopping 409 yards of offense to 174 for Gates. Perry led the Bears rushing with 146 yards on 20 carries while Olsen had 84 yards on 18 touches for the Red Barons. Hunter passed for 215 yards and three touchdowns; two of those scoring strikes went to Riddick, who finished with 141 receiving yards.

Hertford County is 1-0 to open the year and will travel to Wilson Hunt next Friday night. Gates County is 0-1 and faces Oxford Webb in their home opener on the same night.