AHOSKIE – Dr. Jimmy Tate, the eighth president of Roanoke-Chowan Community College, announced his resignation at a special call meeting of the school’s Board of Trustees at the Union campus on Thursday.

In a resignation letter disclosed to the News-Herald on Friday, Tate would only say he is leaving to pursue other career goals. He declined to name the organization he would be joining, citing pending negotiations.

Tate was appointed to the post more than 11 months ago after the college initiated a search for a successor to Dr. Michael Elam, who served at the post from 2013 until June 30 of last year. Like Elam, Tate originally signed a three-year contract.

R-CCC Board of Trustees Chairman Andre Lassiter, when contacted on Friday, said several Board members were surprised at Tate’s sudden resignation. 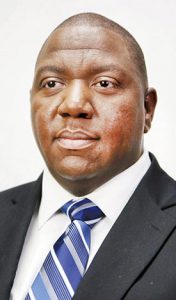 “He informed us that this was an opportunity that he simply could not refuse,” Lassiter said. “He’s one of the best presidents we’ve had here at the college, at least during my tenure and he did some truly great things. He moved Roanoke-Chowan Community College forward in a very positive way.”

Lassiter said Tate requested an opportunity to be released early from his contract.

“It pained me to see him go, but I fully understand with that much life left in his career,” Lassiter stated.”We didn’t want to be a hindrance.”

Lassiter said in the interim, the college’s three-year Chief Financial Officer, David Foster, would serve as president and that a search will be initiated immediately.

“We have to move forward,” Lassiter surmised, “but Tate will be missed.”

A native of Pender County, where he also had served as a county commissioner, Tate was the former Vice-President for College Advancement and Strategic Initiatives at James Sprunt Community College in Kenansville, and brought over 30 years of community college and university experience to RCCC.

Tate told faculty and staff that he is proud of the accomplishments the he and the employees of the “Home of the Waves” – a phrase he affectionately coined to bolster school spirit and pride – have made together.

“When I first arrived at the College in August 2016, enrollment increased from over 600 students to more than 900 students in the Fall Semester,” he said.

Tate also cited the great pride he took in the renovations undertaken at the campus, including the landscaping of the grounds and facilities.

Additionally, Tate thanked the school’s Board of Trustees for their support and said together they should all be proud of the accomplishments that had been made during 2016-17, the single academic year Tate was in charge at the school.

In his resignation letter, Tate cited many of the achievements he helped make possible at the school over the past 12 months:

The Roanoke Chowan Community College Criminal Justice Cadet program graduated 16 students with Corrections Specialist certificates in May 2017 and a second cohort of students will begin classes in fall 2017.

Fire and safety courses experienced an FTE and enrollment increase.

Additional College and Career Readiness course at Nuvision (due to high interest).

New Student Orientation was well attended by incoming students and their parents/guardians.

The College started an Executive Certificate in Ministry course to bring leaders together to enhance the ministry profession.

The campus has received a major overhaul including adding a clock tower and gazebo to the grounds.

Updates to the campus HVAC control system has begun.

The College has received approval to start Connect NC bond projects that have received the NC State Board of Community Colleges approval.

The College received an outstanding clean financial audit for 2014-2016.

Fifty percent of employee computers and computers for student labs have replaced.

R-CCC and Hertford County High School are one of the recipients of the Catalyzing Career and Technical Education Through Enhanced Career Pathways Funding Competition monies.

The pass rate for students taking the NCLEX exam increased to nearly 88%.

“I’m proud of the accomplishments that have been made under my tenure, but I must give all the credit for success to the faculty, staff, and the RCCC President’s Council,” Tate said. “I’m grateful for the opportunity the Board of Trustees extended me to join Roanoke-Chowan Community College as one of the youngest presidents in the North Carolina Community College System.”

Tate said he wishes the College and its Board of Trustees much success in the future.