AHOSKIE – Less than two years into his maiden voyage as a municipal politician, Justin Freeman is moving on.

At Tuesday’s meeting of the Ahoskie Town Councilman, Freeman announced his resignation from that governing body.

In a letter addressed to Ahoskie Mayor Jimmie Rowe, with copies sent to his peers on the Council as well as Town Manager Kerry McDuffie, Freeman stated he and his wife have moved to Greenville. Both, he later said, are employed by East Carolina University and have been commuting back and forth from Ahoskie to Greenville over a long period of time. 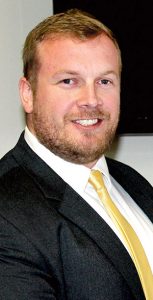 “It has been a pleasure to serve as an elected official for the town that I love and to serve alongside a Mayor, Councilors, Manager, Clerk and Attorney who carry similar values and vision for Ahoskie,” Freeman stated in his letter.

Prior to making the decision to relocate to Greenville, Freeman sent an email to the North Carolina State Board of Elections in Raleigh on May 16 in order to gain information on how to handle his resignation.

The same day he received a response from Joan Troy of the state board, informing Freeman that, “once you relocate your residence, you would, after 30 days, be no longer qualified to vote in Ahoskie contests. This means you would no longer be qualified to serve on the town council.”

With that timetable in mind, Freeman’s letter to Ahoskie officials stated he moved to Greenville on June 12.

“Per the North Carolina Board of Elections, I am granted 30 days to resign from my position on the Council and must do so by July 11,” Freeman maintained.

Ironically, July 11 is the next regularly scheduled meeting of the Ahoskie Town Council.”

“That, July 11, will be my last meeting,” Freeman said following Tuesday morning’s meeting. “I will be officially resigned at the close of that meeting.”

He told the Roanoke-Chowan News-Herald that the relocation to Greenville was simply based on the family’s budget.

“Even though my wife and I work the same schedule at ECU and commute together back and forth, it just didn’t make good sense to keep spending that money on gas as well as the expected wear and tear on our car,” he said.

Freeman added that he accepted the job at ECU in October of last year. Meanwhile, his wife has worked at ECU for approximately two years.

“I didn’t foresee this (job opportunity) nearly two years ago when I decided to seek the Ward A Council seat here in Ahoskie,” Freeman said. ‘It is what it is now; it was too good of an opportunity to turn down.

“But yet I leave with mixed emotions,” he continued. “We’re doing some good things on this Council and I can see a bright future for Ahoskie.”

When asked if he would consider seeking political office in Greenville or Pitt County, Freeman didn’t rule it out.

“I wouldn’t say no to that….and who knows, life may lead me back to Ahoskie one day,” he smiled.

In his letter to the Mayor, Freeman closed by saying, “While I wish I could complete the duration of my elected term, I will depart from this board in full confidence that this (public) body will continue to act in Ahoskie’s best interests. I ask that Council will fully endorse and support our newly appointed Town Manager as he confronts very difficult decisions. These decisions may involve budget or personnel, and may come with some initial sting. However, I hope the Ahoskie Town Council will stand behind the person we have hired to do this difficult job and trust his judgment and leadership.”

Freeman was elected as one of the two Ward A Council representatives in November of 2015. His term would have expired in November 2019.

As far as filling the remaining two years on Freeman’s term in office, it’s up to the four other members of the Ahoskie Town Council to make that appointment. That individual must meet certain criteria to be considered: a registered voter, and a citizen of the Ward A district in Ahoskie.