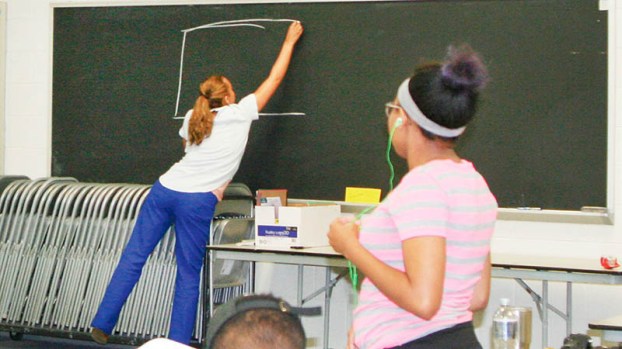 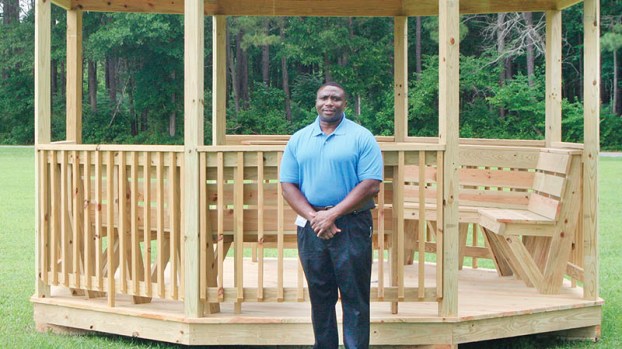 RCCC groundskeeper Tim Lassiter stands in front of the first of two gazebos on the campus grounds. There are plans to add a second gazebo. 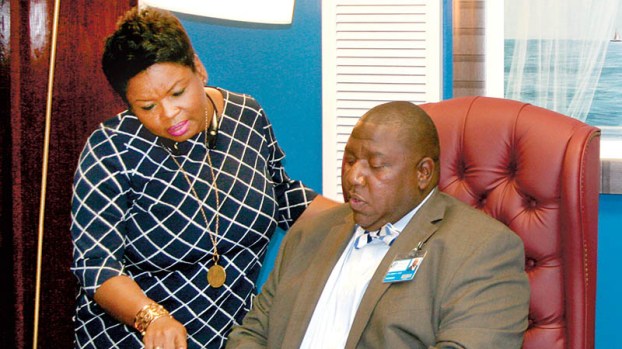 AHOSKIE – In the ten months since he took the position of president at Roanoke Chowan Community College, Dr. Jimmy Tate has been working to make waves across the campus along with his faculty and staff.

Tate said the school’s motto is “Wave pride amplified,” an ideal of school spirit that he hopes will continue to spread not just within the walls, but out into the community as well.

A lot of changes are happening at the local community college. The first noticeable ones are to the campus itself with the addition of a clock tower, fountain, and gazebo. Tate spoke highly of Tim Lassiter, the groundskeeper in charge of designing and putting all of that together.

The landscaping around the clock tower and water fountain are still a work in progress, but a lot of work has been done to it in the last three months. Lassiter was able to get donated concrete to lay down the sidewalk leading to the tower and fountain. He also redesigned the fountain so that it will be able to recycle the water used each day.

Construction was recently completed on one gazebo on the campus grounds with plans for another one underway. Both Tate and Lassiter explained that the addition of the gazebos is to give students a quiet place to study or hang out.

“Even though something is old, doesn’t mean it can’t be new again,” said Lassiter of their work.

Roanoke Chowan Community College opened in 1967 and is celebrating its 50th anniversary this year. Tate explained that they’re working hard not only to improve the campus itself, but also the school’s programs too.

They’ve expanded to a site in the vacant Northampton High School-East building in Creeksville, giving county residents there a closer option for taking classes in choices such as GED and computer literacy. Tate said they intend to add Electric Car in the future to be a “signature program” for the site.

Tate also mentioned the program the college has with Odom Correctional Institution. Recently they had 26 graduates earning certificates in areas such as commercial cleaning, computer literacy, and horticulture.

Other new developments for the community college include publishing a literary arts journal called Aries, adding a mechatronics engineering technology program to teach students how to use robotics in machinery repair, and making articulation agreements with both Elizabeth City State University and Shaw University. The RCCC campus will host classes taught by professors from these two universities so that people desiring a degrees from there won’t have to travel as far to get it.

Already existing programs—such as for CNAs and EMTs—are continuing to have high enrollment and are doing well, Tate reported.

“It’s our duty to have the best trained EMTs,” Tate said, citing the vital importance they serve in the community.

In order to give the students the best educational experience as possible, the college kicked off a capital fundraising campaign beginning in January with the slogan “growing great together in wave country.”

“They wanted to help students be successful,” Tate said of their desire to contribute.

“It’s very essential to help with educational needs,” added Tarsha Dudley, who serves as the administrative assistant to President Tate as well as the Director of the RCCC Foundation.

Dudley explained that the funding will go towards scholarships, textbooks, and other student requirements. The capital campaign fundraising goal is to reach $500,000 by the end of the year.

Starting this school year, Tate said they’ll be creating the President Scholar Club, which will be a scholarship program offered to six students, two each from Hertford, Bertie, and Northampton counties. The students will serve as school ambassadors and will give back to the area with community service.

“We want to be engaged in the community,” Tate emphasized.

Tate never hesitated to give his staff all the credit for the hard work they’re doing at the college, explaining that he’s restructured things so they can all be more productive and efficient. He merged Student Services with the Continuing Education department, for example, to make a smoother transition for enrolling students whether or not they have a high school diploma.

Many of the staff, as well, are training so that they can teach across different disciplines and be dually certified.

“People are wearing multiple hats,” Tate said with a laugh.

The walls of the President’s office have been recently painted blue and decorated with a seaside theme to reflect the school’s “Wave Pride” that Tate spoke so proudly about. He reiterated their goals to enhance the quality of life for students as they return for the new semester in August, and he said he’s been amazed by all the support he’s had so far.

“We’re making the Northeast region as strong as we can make it,” he said. “Our students deserve the best.”

Like waves washing up on a shore, the ripples will continue at Roanoke Chowan Community College for a long time to come.