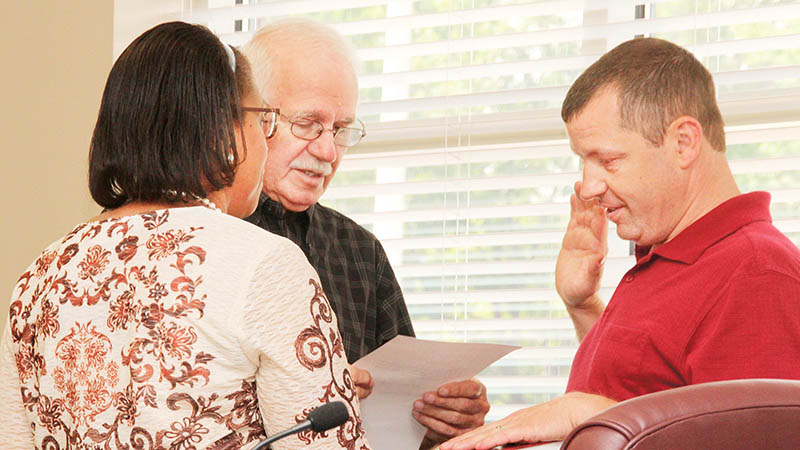 AHOSKIE – Projected revenue can’t be counted unless it shows up on a financial statement.

Speaking here June 13 near the close of the regularly scheduled Town Council meeting, Freeman noted there was only one new home constructed in Ahoskie last year.

“All these (building permit) fees we have are not revenue-generating fees,” said Freeman, waiting until the portion of Tuesday’s meeting agenda reserved for comments from Council members to make his remarks. “They are fees for nobody and for nothing.”

Freeman said there seems to be significant costs for those choosing to build a new home or business in Ahoskie.

“We spend piles of money on trying to initiate growth, but cutting our building permit fees may provide an opportunity for growth,” he added.

“I know we’re not exactly at a good time to be cutting our fees,” Freeman remarked, referencing the town’s budget woes a few months ago. “But these fees are not producing revenue anyway.”

Freeman challenged newly hired Ahoskie Town Manager Kerry McDuffie – who was in attendance at Tuesday’s meeting, but his first official day on the job is June 19 – to look at the building permit fees and possibly waive them through a Council approved moratorium.

“We could possibly waive them for a year, maybe longer, to help generate more building and growth in Ahoskie,” suggested Freeman. “There’s plenty of empty land that can be turned into future homes and businesses.”

He added that despite not possibility charging fees for construction permits, that loss could be offset by the revenue generated through long-term gains in property tax.

“We’re not losing anything, because we’re not seeing any revenue coming in (due to the lack of any new residential/commercial construction),” Freeman stressed.

“If a builder decides to construct a home today in Ahoskie, the total cost of those permits can go as high as $13,620 and that’s a cost before the first shovel goes in the ground,” said Rowe, himself a former local business owner and currently the construction manager of Commercial Ready Mix Products.

‘The county (building permit fees) is less than ours by quite a bit,” the Mayor added.

“Justin is right; our permit fees are not producing any revenue when we build only one house in one year,” chimed in Town Councilwoman Linda Blackburn.

“Before we make any concrete decision on this, may I suggest we let Paul (Vaughan, the town’s Building Inspector) have a meeting with some of the local (building) contractors and get some feedback from them over these (building permit) fees,” Rowe said.

While on the subject of building permits, Rowe pointed out how high the fees were for commercial construction.

“Paul told me the fees for commercial and industrial are quite a bit higher than residential,” said the Mayor. “Hold on to your seats, here’s what Cypress Gardens (a residential apartment complex that opened last year off Everett Street) paid in permit fees – $145,800.

“I spoke with the guy in charge (of the firm managing Cypress Gardens) and he said they would be very interested in another similar project here in town, but they would not pay that high fee again,” Rowe added.

The Council took no official action on any of the comments made regarding the building permit fees.