MERRY HILL – For the third time in two years, a former Lawrence Academy baseball player has opted to remain close to home as ex-Warrior pitcher-first baseman Slade Cowan inked a grant-in-aid here Monday to play next season for nearby Chowan University.

Cowan joins former Warrior teammates Jarrett Harrell, who signed with the Hawks last month; and 2016 signee Tyler Jones, who hit .328 and started 22 of 23 games for Chowan as a freshman. 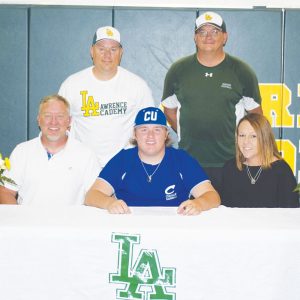 “Baseball has always been a love of mine along with hunting and fishing with Dad,” Cowan said. “I’ve been playing since I was five and I always worked hard at it.”

“When I was 10, my parents contacted (then-Chowan coach Aaron Carroll) to ask if there was anyone that could give me one-on-one workouts to help me with hitting and pitching,” Cowan recalled. “The coach recommended Brian Hill. From the first day I met him (at Hawkins Field); I was in awe like a kid at Christmas. It was like I was at an MLB stadium and a college baseball player was working with me. (My mind) was made up from that day and my goal turned into being good enough to go to Chowan and play on their baseball team. Brian will always be a mentor to me.”

“After I got into high school I started going to Chowan games to watch Tyler play, and I knew even more I had to be a part of the Chowan baseball team. I got to meet Coach Furlough during this time, and from talking to him and other coaches I could feel the family bond from the team which is what I feed off of,” Cowan stated.

Cowan finished his prep career with a batting average of .384, 23 runs-batted-in and 20 runs scored. As a southpaw lefty hurler, his pitching record was 3-0 with two saves. In nine games he gave up 18 hits with 25 strikeouts for a 1.30 earned-run-average. Cowan has also played American Legion baseball summers since 8th grade.

“Chowan University’s appealing to me as a school, because of its size,” he said. “Family, baseball, hunting and fishing are my life. I could sit here and tell you I was looked at by this college and that college, and several asked me to come work out with their school and take tours of different campuses, but it was never a thought. I applied to Chowan and Chowan only.”

Cowan hopes in 2018 he and his former – and future – teammates can have a reunion on the diamond.

“Jarrett Harrell, another childhood friend signing this year, also makes me really happy,” he concluded. “It’s gonna be nice playing a few more years with him and Tyler Jones. I love the fact that Chowan picks up all the local boys it can.”