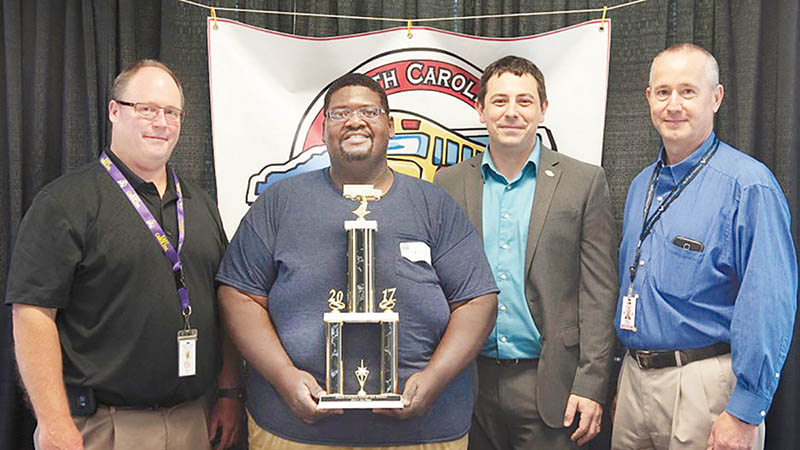 AHOSKIE – Eric Turner has been a bus driver for over 20years with the Hertford County school system, and in that time, he estimates he’s only missed about three School Bus “Roadeo” competitions.

The School Bus “Roadeo” is an annual competition that tests the skills of bus drivers all over the county. Turner is this year’s first place winner at the county level, district level, and state level.

“It’s all stuff we do during the course of the year,” Turner says of the variety of competition maneuvers including right turns, stopping, parallel parking, and railroad crossing.

Turner, whose current bus route takes kids to and from the Hertford County Early College High School, says he gets practice in all the competition challenges, although he notes that he usually only passes over railroad crossings if he’s taking the students on a field trip.

Turner’s favorite move of the “Roadeo” is the diminishing clearance maneuver, where he must drive the bus in a lane that gets continually narrower. It begins with ten inches clearance on each side of the bus and ends with two inches.

He says that the most difficult part of the competition is the back up maneuver, or “back into the garage” as Turner calls it. He has to make sure that he’s moving at the correct angle so that he doesn’t hit the sides of anything. For added difficulty, the maneuver must be completed in three minutes or less.

The state competition also includes a written test, which Turner says is quite difficult since he doesn’t really like tests. He has the distinction, however, of being the first person to score 100 on the state test, an accomplishment he’s proud of.

Winning the state competition on May 25 means that Turner will get a chance to compete in the School Bus Driver International Safety Competition taking place in July in Indianapolis, Indiana. Turner previously competed in the national competition in 2014 after he won the state.

“Once you get a taste of it, you want to go back,” Turner says about his excitement for returning to compete again. “I’m just going to have fun and do my best.”

Despite his competition success, Turner is humble about the experience and doesn’t let it go to his head.

“I’m just the one that got the title this time,” he says, adding that he’s simply one of many bus drivers who do these kinds of things every day.

He says he reminds himself that “there’s always next year” to try again.

It’s clear that Turner really loves his work as a bus driver, explaining that he enjoys meeting people. His goal has always been to be someone that the students can turn to for support if they need anything, something he says he didn’t have from his bus drivers growing up.

“I can maybe make a difference in a child’s life, you never know,” Turner explains.

For Turner, getting to compete in the School Bus “Roadeo” is just the “icing on the cake,” as he says.