The ‘gospel’ according to Joan 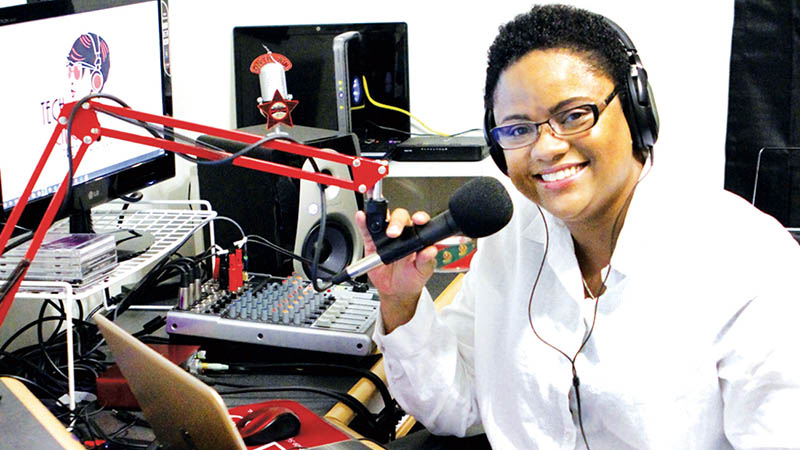 Joan McCullough sits at the mixer/console of her home-based online internet venture, BJS Gospel Radio, which she launched in January. The former girl’s basketball coach at both Hertford County and Bertie High Schools says she’s ready to embrace this next chapter of her life story. | Next Level Photos / Charles Revelle

AHOSKIE – Joan Sharpe McCullough is proof that as one door closes, another one opens.

A former educator and coach in the Roanoke-Chowan area, McCullough – through her TechChick Productions – launched BJS Radio in January. The station features a format of 24-hour/7 day a week gospel music over the internet and is operated out of McCullough’s home.

And how does she access her songs; you might say it’s ‘heavenly’ because the technology, she notes, is in the clouds – cloud computer audio storage which enables her to store her voluminous playlist digitally, keeping it easily accessible and available.

Radio is merely a portion of TechChick, which also includes a photography business and McCullough’s many blogs.

“We’re in the growing stages right now,” she acknowledges. “I don’t even have a staff yet, so I’m doing it all by myself. I get home from work at night and then produce my shows.”

McCullough’s primary production for her own station is ‘The Praise Unit’, airing every Sunday in syndication online. But she has other producing ventures.

VSC radio is a clearinghouse for online gospel radio over the internet that helps artists, DJ’s, and producers get their start in the medium. McCullough’s premier venture is BJS radio and is named for her late mother.

“My mother, Beulah Jean Sharpe, passed away in 1985 when I was 10 years old,” she said. “She had just opened one of the first non-profits in the area called the Center for Women’s Economic Alternatives. They were known as one of the early advocates for the workers at Perdue Farms (in Lewiston-Woodville). The Center was a grassroots organization that sought to represent workers in low-income occupations.”

The younger McCullough went on to star in basketball at Hertford County High and later at Elizabeth City State. She was a biology teacher and girl’s basketball coach with Hertford County Public Schools for 10 seasons, winning several conference and tournament championships before moving to Northampton County High as Assistant Principal. She left there after four years before moving to Bertie County Schools in administration. She then did a second tour with both HCHS and Bertie before heading off to a different educational position out-of-state a year ago.

“In education you don’t just coach,” she noted. “You have to teach or do something else to make a salary, to make ends meet. When I was at Bertie, I was an Instructional Technology Specialist; and it was difficult – very difficult, agonizing – to give up coaching.”

McCullough says her faith and resolve strengthened her.

“When God tells you to move, you have to obey,” she acknowledged. “I feel that I’m doing something that’s really important and it’s giving me a lot of satisfaction.

“I looked into resurrecting the non-profit before I decided, ‘Hey, that’s not your thing, that’s your mom’s thing’,” she related. “I was more tech-savvy and now I have a chance to stay home, continue my mother’s legacy, give back to the community, and work my natural gifts all at the same time.”

Using many of her own resources, as well as some limited outside assistance, McCullough was able to get her dream off the ground.

“I have some sponsorships and I do take some photography work,” she explained. “I then just take the money and roll it over into the equipment I need to keep going. I found some microphones in a low-budget range that perform in a high-budget level so I have the equipment that I need to get the job done.”

McCullough says she uses special software that’s able to produce a professional stereo sound. She also has developed relationships with artists and receives quite a bit of music through electronic downloadable promotional kits.

“They send me a lot of music for airplay,” she said. “A lot of the older songs were from albums, CD’s, and other formats that I already owned.”

Like any good teacher, McCullough has a great lesson plan, and she does her homework.

“With the contemporary music, I research what’s trending and what’s hot,” she admitted. “I don’t mind purchasing singles from I-Tunes and Amazon Music so that my listeners can hear the same things they might also hear on Pandora or any other internet radio station.”

McCullough says anyone who wants to listen in to her radio can download the free custom BJS Radio app from Android or Apple. It can also be accessed by going to tunein.com, search for BLS Radio and one can listen on computer.

“I really want people to know that internet radio is really the future because when listening to a terrestrial station, once you drive out of its radius of miles the signal will go out,” McCullough says. “You can listen to BJS with Bluetooth, or with an auxiliary cord and you can hear us anywhere in the world as long as you have cell service, wi-fi, or an internet connection. We also have a website – bjsradio.com – where you can listen as well.”