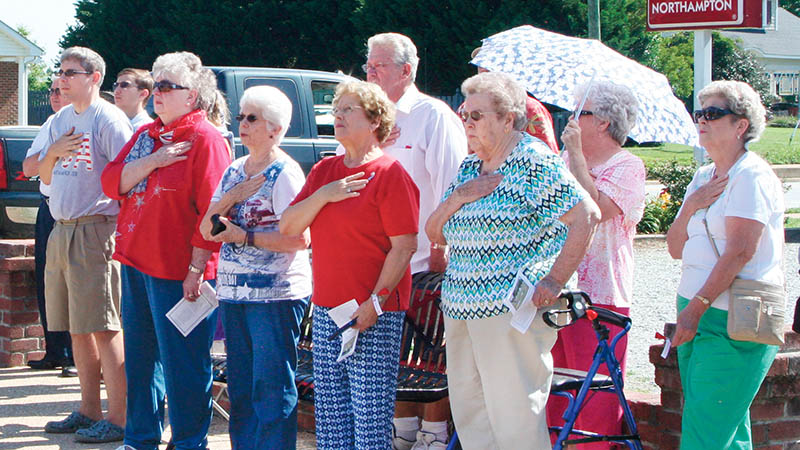 A portion of the crowd attending Monday’s Memorial Day service in Conway place their hands over their hearts as the National Anthem is played. | Staff photos by Holly Taylor

CONWAY – At half-staff, the flags fluttered in the day’s light breeze: the state flag, the POW-MIA flag, and above those, the American flag.

These flags flying at Conway’s Veterans Memorial Park were lowered on Memorial Day to honor the fallen who have served our country.

People gathered at the town’s park early on Monday morning for the annual service to remember the loved ones lost and to support the families left behind. Everyone in attendance received a small paper flower from the American Legion to commemorate the military veterans.

The short service began with a few words by Mayor Tommy Barrett, followed by a prayer from Town Commissioner Lee Duke. 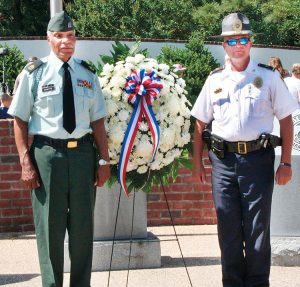 U.S. Army veterans Stanley Majette (left) and Billy Duke had the honor of placing a wreath at the center of Conway’s Veterans Memorial Park as part of Monday morning’s ceremony.

“For those who have it, freedom is like oxygen,” Commissioner Duke said in his prayer before asking God to bless those who fought and still fight for freedom.

After the crowd of veterans and families stood together to sing the National Anthem and say the Pledge of Allegiance, Reverend Ricky Barnes of Lasker Baptist Church stepped up to the podium to deliver his message to those in attendance.

“We want to perpetuate their memory,” Barnes said.

He concluded his speech with a final bit of advice to the crowd: “Let us remember. Let us celebrate. Let us teach our children.”

A wreath of white flowers was placed at the center of the town’s memorial park by Army veterans Billy Duke and Stanley Majette. The two of them stood at attention with hands in a salute while the solemn notes of a trumpet playing “Taps” rang out through the park.

The service concluded with a prayer from Nancy Jenkins, the town administrator, asking God to protect everyone in the military.

Mayor Barrett said afterwards he was grateful for the teamwork from everyone to get the event together. Conway’s Veterans Memorial Park was dedicated in 2008 and has been the site of the town’s Memorial Day and Veteran’s Day services ever since.

Thanks to generous donations, Mayor Barrett said the town was also able to recently add new metal benches in the park to replace the deteriorating wooden ones.

“We look forward to having this service each year to honor our fallen veterans and remember their families that have been left behind,” said Jenkins after the event while the flags continued to wave overhead.