CONWAY – Citizen complaints regarding the alleged sale of illegal narcotics led to the arrest of a Conway man here last week.

Conway Police Chief Jimmy Bracy said 40-year-old David Owen Silver of Conway Village Apartments was arrested April 15 following a traffic stop. Subsequent to the stop, a search of Sliver’s person and his vehicle revealed cocaine and marijuana along with a handgun and $1,779 in U.S. currency. 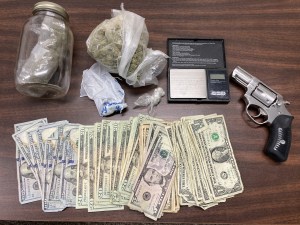 An April 15 traffic stop in Conway yielded cocaine, marijuana, nearly $1,800 in cash and a handgun. Photo by Conway Police Dept.

“The handgun had not been reported stolen,” Bracy said. “We are running a trace on it with the ATF (Alcohol, Tobacco & Firearms) to determine who it’s registered to.”

Silver was placed under a $6,000 secured bond, which was posted. He is scheduled to answer the drug charges in Northampton County Criminal District Court on May 6.

“I had received complaints from our citizens about Mr. Silver allegedly selling illegal drugs at the Conway Park Apartments,” Bracy said. “I saw him in his vehicle at those apartments on the morning of April 15. I was familiar that his driver’s license was revoked and that the registration on his vehicle was expired. As he drove away from the apartments, I initiated a traffic stop with the assistance of the Northampton County Sheriff’s Office and the Woodland Police Department. I thank both of those agencies for their assistance.”

Bracy also thanked the citizens of Conway for their commitment to make their community safer by providing him with information.

“I encourage them to continue to report drug activity in their neighborhoods; on their streets,” Bracy stressed. “That info helps us build our cases and upon arrest it removes those drugs and that dealer from peddling narcotics in our town and in our county. These arrests keep drugs out of the hands of our children.”