FRANKLIN, VA – A local man is in the Hertford County Detention Center awaiting extradition back to Virginia where he stands accused of numerous charges, including robbery and abduction.

According to information shared on the Franklin (VA) Police Department’s Facebook page, 39-year-old Junior Devon Williams of Conway is identified as the suspect in a crime that occurred around 10 p.m. on Friday (Oct. 8) at the Franklin Walmart. 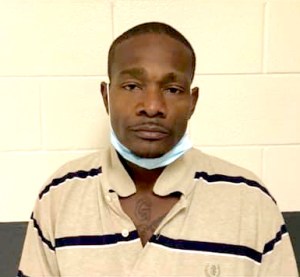 In a press release, Franklin Police Sgt. Scott Halverson said that an individual, apparently while outside the store, was approached by a male who requested money to purchase gas. That male displayed a firearm and forced the individual inside the store and ordered them to withdraw an undisclosed amount of cash from an ATM.

“The victim was then forced to drive the suspect to an unknown location in North Carolina,” Sgt. Halverson noted in the press release posted on Facebook.

An investigation by the Franklin Police ensued, which eventually led them to identify the suspect as Williams.

Arrest warrants were obtained, charging Williams with robbery, use of a firearm while committing a robbery, abduction, and possession of a firearm by a convicted felon.

Franklin Police detectives were assisted by the Murfreesboro Police Department in locating and arresting Williams.

According to the North Carolina Department of Corrections website, Williams has previous convictions and served several short stints in jail for larceny/possession of stolen goods crimes in Wake (2006), Hertford (2007 and 2009), and Halifax (2010 and 2016) counties.