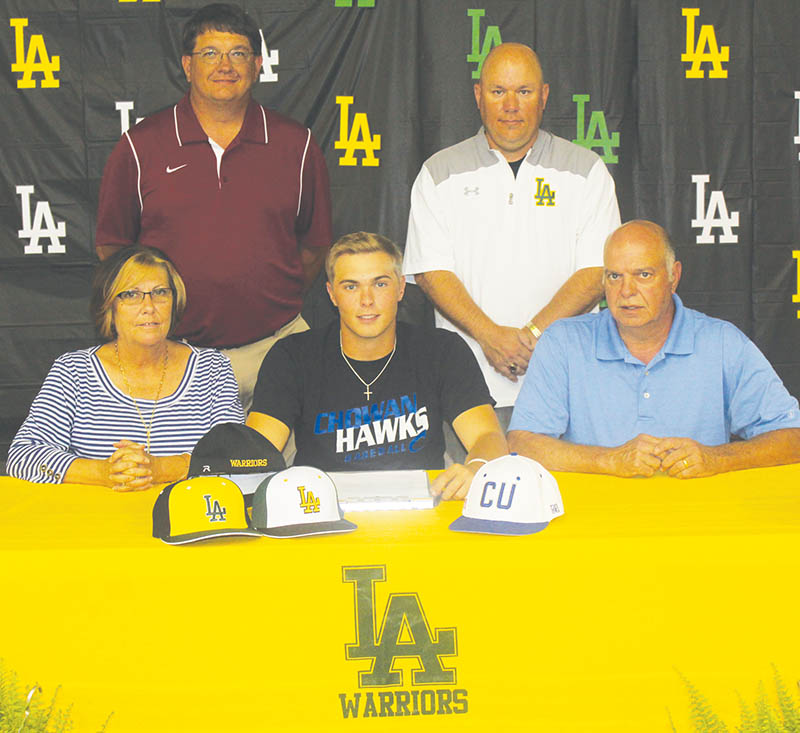 MERRY HILL – Jarrett Harrell credits every baseball coach he’s ever had as influencing his game from T-ball all the way through high school.

“I’ve had a number of coaches growing up,” Harrell said. “I’ve had my brother (Gates Co. HS coach Jacob Harrell), Coach Kravitz (Robert, now at Parrott Academy), Coach Wynne (Jason, LAW coach); I probably could take a little bit from each one of them.”

Each one he credits with molding his game, and now, with his high school career complete, he’s moving on to the next phase. Harrell signed a national letter-of-intent to attend Chowan University next fall at Lawrence Gym on Wednesday with his parents, coaches, teammates, and classmates on hand for the occasion.

Even though he confesses the hurt of his 2017 Warriors team just missing out on an independent schools state championship still lingers (LAW fell to Kerr-Vance in the NCISAA title series last weekend two games-to-one), Harrell says he now wants to focus on what’s ahead.

“Certainly, I’d like to start (in college), but all things take time and you have to have patience,” he acknowledged.

Harrell closed his prep career his senior year as a .346 hitter with a .603 slugging percentage, while driving in 27 runs and scoring 30 more himself. As a pitcher he was 5-0 with four saves. He only gave up 30 hits in 13 games with 68 strikeouts and an earned-run-average of 1.04.

In addition to college, Harrell also attracted the attention of pro scouts, but said he was looking forward to the comfort of playing for Chowan; especially on a team with so many players he’s grown up with.

“I know people there,” he related. “I’ve got best friends there, and it’s always a pleasure playing with (former LAW teammate) Tyler Jones.”

A chance to play close to home was also attractive to the 6’ 1” 190-pound catcher/pitcher. He says Chowan just had the right type of atmosphere.

“It’s close to home,” he said. “It’s a small town like Ahoskie – just 20 minutes away – and their baseball team is getting better every year. They’re so close, and they’ve got a lot of great talent coming in.”

Harrell says he wants to play college baseball for all four years, and after that – despite coming from a family of businessmen – hopes to embark on a coaching career.

“I want to major in health and physical education and become a coach when I graduate,” Harrell says. “I want to coach football and baseball.”

Lenoir-Rhyne, UNC-Pembroke, and even nearby Norfolk (VA) State University were some of the schools Harrell spurned to sign with Chowan and play where he felt comfortable.

“I guess it breaks down that I just wanted to stay close to home,” he concluded.