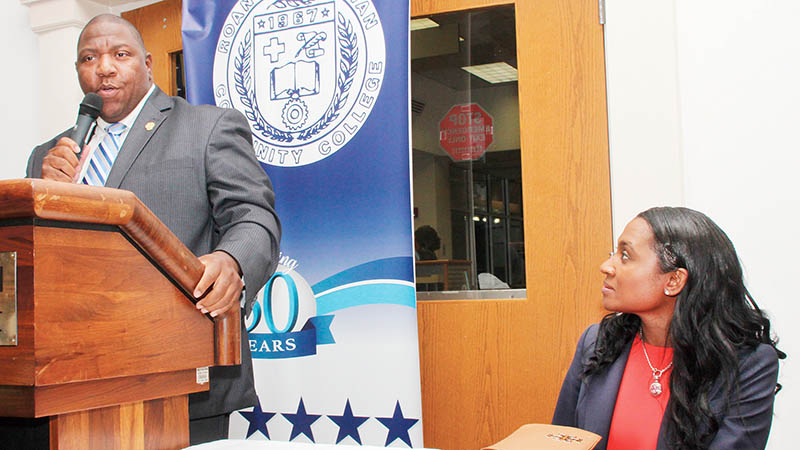 On May 23, the presidents of Shaw University and Roanoke-Chowan Community College co-signed an agreement that relocates the Shaw University-Ahoskie degree completion program (CAPE) to the R-CCC campus. The agreement between the two institutions will continue to expand educational opportunities for North Carolinians in the eastern region of the state.

Dr. Michael T. West, Executive Director of Shaw University CAPE, noted that this unique learning program has been a mainstay in the Ahoskie community, at various other locations, since 1983.

“We’re excited to have our program now located on the R-CCC campus,” Dr. West said. “This joint venture was made possible by the two presidents sitting down and hashing out all the details, part of which is an agreement where R-CCC students can transfer their college credits to Shaw University, meaning they can finish their four-year degree in two years upon graduating from R-CCC.” 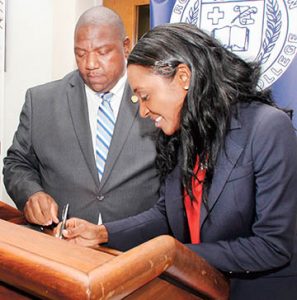 The two college presidents seal the deal by signing the paperwork on May 23.

“We’ll be able to work with a great institution with a long-standing tradition of excellence for 50 years,” he said of R-CCC’s half-century of offering higher education. “Both these institutions have young presidents, both with innovative bright minds who bring unique ideas to the table that will better serve students enrolled at both schools.”

R-CCC President Dr. Jimmy Tate said he strongly believed this co-location agreement can be used as an example for other community colleges in North Carolina to follow.

“This agreement is so important to R-CCC,” Dr. Tate remarked. “We are delighted to have an outstanding and long-serving educational institution such as Shaw University having a presence here on our campus.”

Tate mentioned the fact that many students across the R-CCC service area struggle to find transportation to a school of higher learning.

“Transportation is a barrier to some of our students when it comes to traveling great distances to obtain an education, but that’s no longer the case here with this co-location agreement with Shaw,” Dr. Tate stressed. “Our students now have a local means of gaining a four-year degree without leaving our campus.”

“We’re on to something positive here; we’re on to something very good here,” Dr. Dubroy stated. “This collaborative effort will be able to serve so many students in this area of the state. I look forward to seeing Roanoke-Chowan Community College students, after they graduate with their two-year degrees from here, matriculate into programs offered by Shaw University.”

She referenced Shaw University as a “responsible partner.”

“As much as we are looking to receive, we’re looking to give,” Dr. Dubroy remarked. “We look at Shaw being epic, as in an acronym. E is for entrepreneurial thinking; P is for our position in the marketplace, training our students to be competitive and future global leaders; I is for innovation, transforming the ideas of our students into businesses; and C is for customer care…..students are our customers.”

“Having this co-location partnership with Shaw University makes it easier for our students from Hertford, Northampton and Bertie counties to obtain their four-year degree by taking courses here on-site,” said Deborah Dickerson, RCCC Dean of Academic Affairs. “We look for many more educational opportunities between our two institutions.”

Through this new agreement, the two institutions have created a seamless pathway for R-CCC graduates to transfer to Shaw University. R-CCC graduates who have earned an Associate in Arts (A.A.) or Associate in Science (A.S.) degree can transfer all A.A. or A.S. credits to Shaw University. These students will be awarded junior status and can complete a B.A. or B.S. degree within two years.

Dr. Tate stressed that the co-location agreement with Shaw University is among several exciting ventures now occurring at RCCC. In addition to improving the academic strength of the college, he mentioned a bold initiative where RCCC has launched a capital campaign to raise $500,000.