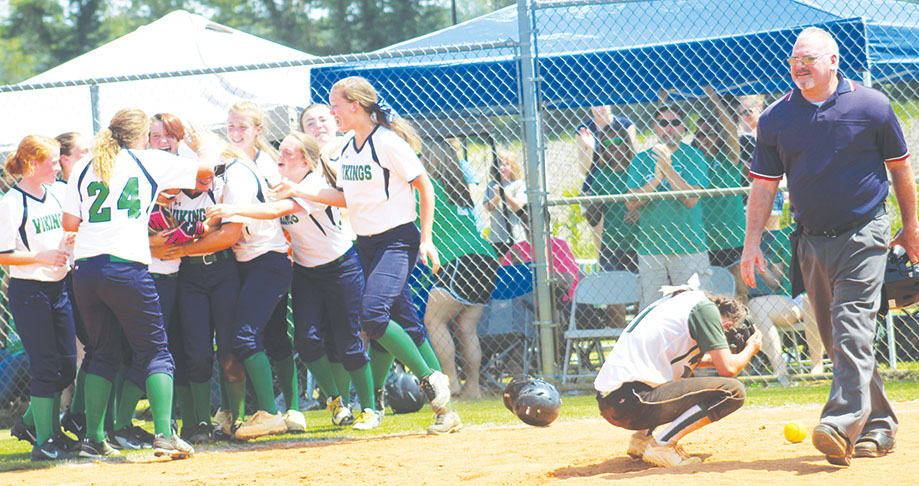 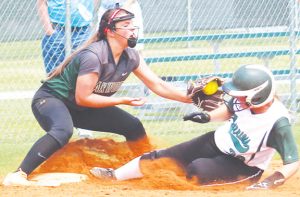 Rebekah Goodwin (right) slides safely into third base in the morning’s elimination game. Lawrence won in the final inning, 12-11.

Lawrence defeated host The Oakwood School twice – getting nine runs in the seventh inning on Friday to post a 14-11 win, then stopping those same Eagles 12-11 in Saturday’s elimination game.

After downing Oakwood, the Warrior ladies fell in the Friday night winner’s bracket game to Halifax, 5-3, and then they would lose the heartbreaker Saturday afternoon by a single run after fighting so valiantly to remain alive and play another game.

“I couldn’t have asked anymore from these girls,” said an emotional Lawrence coach Kristen White. “One play doesn’t cost us the game; things just didn’t go our way today.”

In the elimination game, things were tied at 1-1 after the first inning when Lawrence exploded for six runs in the top of the second, building to a 7-1 lead.

The Lady Eagles struck back in the top of the third, getting four of those runs back and trailing 7-5 after two innings of softball.

Tacking on two more in the fourth and another deuce across the plate in the fifth, it was 11-5, Warriors, headed to the sixth.  Oakwood got three more in that inning to pull within three at 11-8.

With one out in the top of the seventh, Oakwood got two on for Sloane Correa, who belted a Kaitlyn Stotesberry offering over the left field wall for a three-run shot that tied it at 11-all. 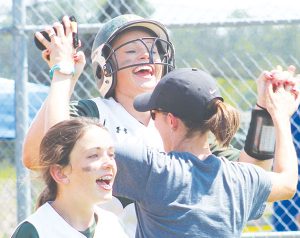 But Stotesberry would end up winning her own game in the bottom of the frame as Lindsey Smith walked and was sacrificed to second before going to third on a passed ball.  Smith scored the winning run on Stotesberry’s base hit up the third base line that bounced off the bag allowing the winning run to cross and sending Lawrence into a re-match with Halifax.

In the clincher, Halifax built a 4-1 lead after two innings before Brinson Edmondson scored allowing Lawrence to halve the deficit to 4-2.

It was 6-4, Halifax in the top of the sixth when Edmondson came through again, taking a pitch out of the ball park in the deepest part of centerfield with one aboard and giving Lawrence new life and knotting the game at 6-6.

But the Lady Vikes got Margaret Hudson in scoring position via a walk, stolen base, and passed ball before a wild pitch was unleashed and she Hudson crossed with the winning run; crushing Lawrence’s hopes of a title run comeback.

White, who also played in a championship game, coached her last game for the Warriors (19-6) in 10 seasons before she heads off to coach Arendell Parrott Academy in Kinston next year.

“I don’t think they wanted this championship for me,” an emotional White said. “I think we wanted this one together; and I’m proud of them for that.”