GREENVILLE – After losing their first game of the year on Friday, the Lawrence Academy Warriors collected themselves well enough to stave off quick elimination Saturday, but their fortune could not hold out as they fell to Kerr-Vance Academy, 5-1, in the NC Independent Schools Athletic Association 1A Baseball Championship.

The championship series was played at The Oakwood School in Greenville.

A team that hit over .300 all season, Lawrence somehow suffered a power-drain in the title tilt, managing just eight hits over the three games: three hits each from Austin Wynne and Charles Atkins.  The Warriors could only bang out one safety in the championship game. 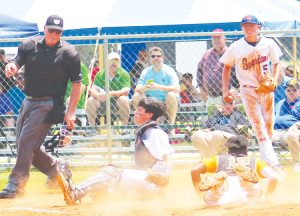 Lawrence Academy’s DaQuan Wilson slide home with a run as the Warriors staved off elimination against Halifax Academy with a 2-1 first-game win in the NCISAA 1A state championship. | Staff Photos by Gene Motley

“It’s a microcosm of what we didn’t want to happen,” said a somber Lawrence coach Jason Wynne. “We had timely hits all year, but today we couldn’t get that big inning.”

Friday night, Lawrence led 2-0 after three innings thanks to Atkins – reaching on an error that scored one run and driving in the other – before KVA went ahead in the fourth.  Though the Warriors tied it at 3-3 on a Wynne double, they didn’t get a hit the rest of the way and the Spartans broke Lawrence’s 22-game win streak with a 5-3 victory.

Facing elimination Saturday under clear but very warm conditions, Lawrence trailed 1-0 before DaQuan Wilson reached on an error.  Wynne then sent a line drive shot into the gap in left centerfield and Wilson never stopped motoring until he’d crossed the plate with the tying run.

It remained that way until the top of the fifth when Bond Wilson and DaQuan Wilson drew back-to-back walks.  Bond Wilson moved to third on a passed ball and scored the go-ahead run on Miller Trowell’s ground out.  The one-run lead, 2-1, was shaky, but the pitching of starter Jarrett Harrell made it stand up.

Harrell gave up the run in the first inning, but never allowed a runner past first base the rest of the game.  After surrendering his lone run, the tall right-hander retired 17 of the next 19 batters he faced, giving up just a couple of singles.  Harrell also finished with eight strikeouts.  His Warrior teammates played great defense behind him as well, including Atkins making two diving catches in right field in the seventh inning to preserve the 2-1 win.

Both teams only got four hits in the early afternoon game.  Atkins was 2-for-4 while Wynne and Bond Wilson got the other hits.  Miller Trowell and Wynne drove in the only two LAW runs they needed.

Then came the third and deciding game.

Kerr-Vance got four runs in the top of the third inning.  Starter Miller Trowell gave up three runs before giving way to Slade Cowan in relief, who surrendered the fourth run.

Offensively, Lawrence just couldn’t figure out KVA starter Colby Wilkerson.  He held the Warrior bats in check like they’d been handcuffed, retiring the first 11 batters wearing green that he faced.  As the large Lawrence fan contingent sat in stunned silence, a team that had gone through a 22-game win streak before losing their first game one night earlier was suddenly being no-hit through five innings. Lawrence got its first two base runners of the game on back-to-back errors in the fourth, but they never got past second base.

In the top of the sixth, and facing being shut-out in a ball game for the first time all season, Lawrence finally got the goose-egg off the scoreboard.  With one out, DaQuan Wilson reached on a throwing error and kept digging all the way into second base.  Wynne followed with a double – the first Warrior hit of the game – and Wilson scored from second base.   As their fans erupted, talk became much more positive in the Lawrence dugout.  But the Spartans were not giving up their lead; Cam Murphy relieved Wilkerson and he would get a ground out and then a strike out and now Lawrence was three outs away from elimination. 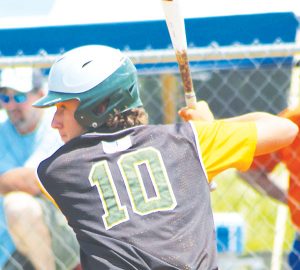 Charles Atkins had three hits and played great defense for LAW in the series, but the Warriors couldn’t pull out the title, falling to the Spartans 5-1 in the clincher.

Try as they could to rally, the Warriors didn’t have anything left. Murphy retired the side in order, and when Miller Trowell popped up to third, Lawrence’s season came so painfully to a 5-1 close.

“A lot of folks doubted us this year,” added Harrell. “They won it, but I’ll still believe we’re the best team in the state; and we’ll have this season to always remember.”

As tough as the loss was for the Warriors, they accepted their runner-up trophy and took solace in a 23-2 season; being one of only two 1A teams left on the final day playing in the final game.