Back to the future

They’re one away from ‘Mission Accomplished’.

Tuesday, the Warriors topped Wayne Christian School here 5-3 in the NC Independent Schools Athletic Association semi-finals and upped their record to 22-0 in the process.

Wayne Christian wasted little time getting to starter Miller Trowell as the Eagles struck for a pair of runs in the top of the first inning to lead it 2-0 after just a half-inning of baseball. 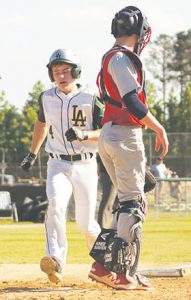 But back came the Warriors, as they answered with three runs of their own in their half of the first.  DaQuan Wilson drew a walk, and then advanced all the way to third base on an Austin Wynne single to right field.  After Wood Trowell walked to load the bases, Wilson scored Lawrence’s first run on a wild pitch and the other runners moved up.  Slade Cowan then delivered a deep sacrifice fly for an RBI to score Wynne, and Trowell came home with the third run on a sacrifice fly by Jarrett Harrell for a 3-2 Lawrence lead after one.

Lawrence added another run in the bottom of the second inning when Miller Trowell opened with a walk, stole second, and went to third on a Gavin Smithwick groundout.  Trowell then scrambled home with the Warriors’ fourth run when Nixon Rascoe executed a perfect bunt up the first-base line.   Lawrence had doubled up the Eagles, 4-2.

Miller Trowell was pulled in the top of the third after loading the bases as Coach Wynne made a pitching change, moving Harrell from behind the plate to the mound.  But an error one batter later allowed a run to score and the Eagles had climbed within a run at 4-3.

Lawrence added some insurance in the bottom of the fourth when Miller Trowell singled to center.  He went to second on a wild pitch and then stole third on a thwarted pickoff throw.  That error allowed Trowell to scramble home with the Warriors’ fifth run.

Wayne Christian tried to rally in the seventh.  After a lead-off single got a runner on first Lawrence turned a double play to leave the Eagles down to their last out. Harrell gave up another single, but a groundout ended the threat and the Warriors were off to the championship. 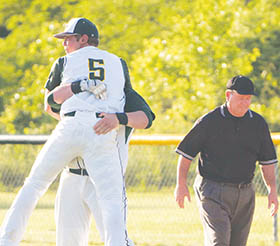 Later, seniors Jarrett Harrell (#5) and Slade Cowan celebrate the final out in the Warriors’ 5-3 win that advanced LAW to the state championship this weekend in Greenville.

Lawrence had five hits; two by Miller Trowell and one hit each by Wood Trowell, Harrell, and Wynne.

“This is what we’ve worked for all year,” said Coach Wynne. “We executed on offense and got some key hits.  We also had great pitching today; our pitching is now all set up and ready to go.

Next stop for Lawrence – the top seed – is the NCISAA state championship best-of-three beginning Friday at 4 p.m. at the Oakwood School in Greenville against #2-seed Kerr-Vance Academy.  The second game, and third if necessary, will be Saturday starting at 12 noon.