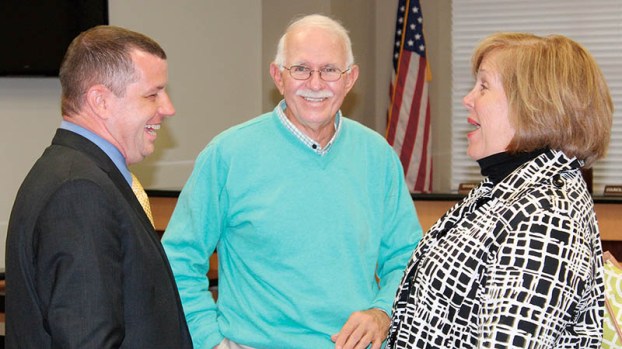 AHOSKIE – A new Town Manager was introduced at the monthly meeting of the Town Council here Tuesday evening at the Fire Station.

Kerry McDuffie, currently the Chief Administrator for the town of Southport in Brunswick County, will assume his new duties on June 19; succeeding Tony Hammond, who retired last month after a dozen years on the job.

A native of Cedar Creek, near Fayetteville, McDuffie earned a bachelor’s degree in psychology and criminal justice from UNC-Charlotte and a master’s degree in public administration from Appalachian State University in Boone.

McDuffie interned in Cary and then was an assistant to the town manager of Troy, in Montgomery County. He served as village administrator of Tobaccoville, in Forsyth County, for three years before spending two years in St. Pauls, in Robeson County.  In 2004 he became Town Administrator in Fremont, in Wayne County; his last post before landing in Southport in 2013.

The new Town Manager has a handicap. He does not see well enough to pass a driver’s test and is often chauffeured when he travels great distances. In Southport he navigated around town in a golf cart and in Fremont used a moped.

“I don’t want people to get the wrong idea,” he joked once to the Goldsboro News-Argus. “I didn’t lose my license, and I don’t want them to think I’m not smart enough to pass the driver’s test.  I deal with it as it comes along.”

McDuffie said he was ready for the challenge in Ahoskie after nearly 20 years of experience in municipal government, including leading the staff of four other municipalities.

“My wife and I were looking for a place to settle down, to become part of the community,” he said in an interview prior to the Council meeting. “This is a nice area to be and there’s nothing wrong with getting to an area where it’s just folks from eastern North Carolina that live.”

In Southport, McDuffie was responsible for the daily supervision of 46 full-time and 12 part-time employees, as well as nearly 100 volunteers through work tasks to seven town departments.  His proficiency in finance included budget planning and implementation, cash and investment management, as well as contingency planning as relates to the town finances.  McDuffie also sought and encouraged economic development opportunities by working with outside agencies and stakeholders.

“I’m probably better with numbers than I am with logic,” he explained. “Most people are usually stronger with the other.”

The latest audit of Ahoskie’s finances revealed in January that the town’s unassigned General Fund was at minus $26,008; this after the 2014-15 audit showed the General Fund was in the black to the tune of $1,008,379.

In March, the Town Council passed three proposed budget amendments that would decrease both the town’s revenues and expenditures by roughly $850,000, helping to bolster the budget shortfall.

“They’ve explained to me that some of their goals are to build some fund balance, pay off some debt, and to help to shore up the financial condition of the town,” McDuffie emphasized. “That’s some of the conditions we’re going to work on.”

McDuffie says he doesn’t see these as challenges, but as opportunities.

“It’s an opportunity to see how we can better a community and run it efficiently and more effectively,” he said. “I’m told by the Board we have a very good staff here with the town, a very competent staff, and so I’m looking forward to working with them and see what opportunities we have.”

McDuffie says working with other small towns from the Piedmont to the coast has helped prepare him for what he finds in Ahoskie.

“Every place I’ve gone does business a little differently, and I’ve learned a little something from every where I’ve ever been and that knowledge is what’s going to help me with what happens here,” he said.

Based on his start date and the June 30 deadline when it has to be submitted, McDuffie says he doesn’t know how much input he will have with the town’s budget proposal for the upcoming fiscal year.

“When you adopt a budget there are really only two things you’re locked into,” he explained. “You can’t increase the salaries of your elected officials, and you cannot change the tax rate.  Other than that, the rest can be changed, or adjusted in some way, if it needs to be.”

McDuffie says there are no miracle cures for any municipality’s shortfalls.

“There’s no one magic thing that’s going to fix it,” he maintained. “It’s a continuing, striving to operate every day, make good decisions, and then that can be done. Usually anything that’s a quick fix is usually not a long-term solution.”

McDuffie cited an area with a private prison, Nucor Steel, a pellet manufacturer (Enviva), and many small businesses here.  He also praised the region for the four-year institution (Chowan University) and Roanoke-Chowan Community College.

“I really need to get together with the community to understand what the resources are and the strengths and weaknesses of the area, to understand what the opportunities are, and what are the threats,” he said. “The folks who live here all their lives can answer that better than I can because I see my role as coordinating that more than identifying it.”

“There’s a good health-care system and good colleges,” he said. “Those are two really good things you need to start out with because without those two: heath care and education – the rest are going to be that much harder to do.”

The future Manager also said the most important product in the town is its people.

It’s not about where you’re at,” he noted. “It’s more about who you’re around,” he noted. “With its small farming communities and rural life this area has a lot to offer here.”

While Ahoskie awaits McDuffie’s arrival full-time, the town has contracted with Ralph Clark of New Bern as its interim Town Manager. Clark began his interim duties on May 5 and is expected to work until around June 13.

SEVERN – The Community Senior Enhancement Program received a grant on May 4 from the Dominion Foundation, the philanthropic branch... read more