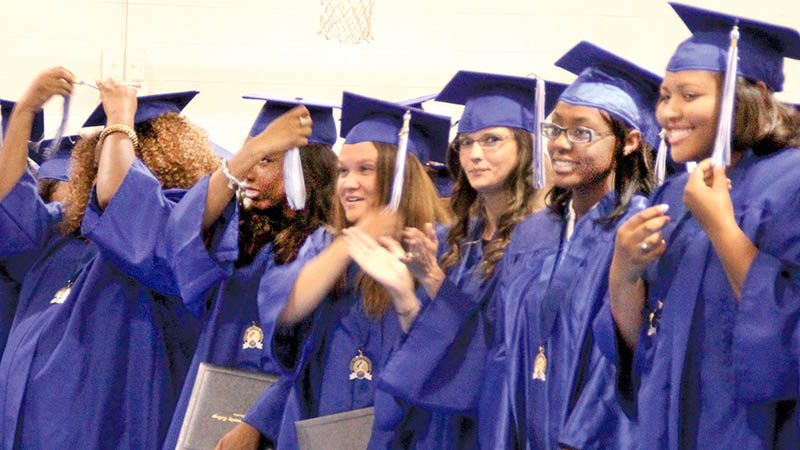 These young ladies were among the 131 graduates to turn their tassels on Friday evening when Roanoke-Chowan Community College conducted its 48th annual graduation ceremony. | Staff Photos by Cal Bryant

AHOSKIE – Who better to deliver the commencement address to graduates of a community college in a rural area than an individual who has walked that same path?

Beth Wood – who proudly proclaims she hails from “Route 1, Cove City” and is a graduate of a community college – fits that bill.

Wood, now in her third term as State Auditor, encouraged the Class of 2017 here at Roanoke-Chowan Community College to parlay that education into an effort to soar to new heights. That graduating class – to a repeated chorus of the school’s new motto: “Waves Pride….Amplified” – numbered 113, including 16 Bertie High School seniors enrolled in the Corrections Specialist I and II Cadet Program offered through RCCC.

The Student Center was full of cheers and applause on Friday evening as those grads made their way across the stage to complete this stage of their lives. 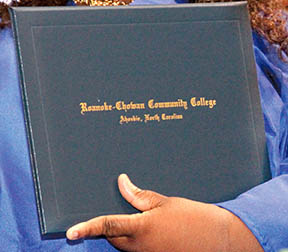 One of the grads holds the end result of two years worth of hard work in the classroom.

“I can remember 43 years ago being in the seat you’re in right now,” said Wood, who made history in 2008 by becoming the first female elected as State Auditor. “I was graduating from Wayne Community College and I had my whole life ahead of me.”

Wood admitted that her life, growing up, wasn’t easy.

“I grew up on a tobacco farm, most days started at 4 in the morning…I’ve planted tobacco, primed tobacco, handed tobacco, looped tobacco, and hung tobacco,” Wood recalled. “Most people would say I grew up poor; I’d say we lived by modest means.”

From that tobacco field, Wood learned the value and reward of hard work.

“First of all, I never, ever allowed anyone to set my limits,” she said. “I graduated from Wayne Community College and worked as a dental hygienist for eight years. But I wanted more; I wanted to go back to my first love, which is math, so I decided to go to East Carolina University and get an accounting degree so I could become a CPA.”

She quit her job and returned to school, 10 years removed from her days at Wayne Community College.

“It was the hardest thing I’ve ever done,” Wood admitted. “There were some that said I wouldn’t make it, but I refused to let other people tell me what I couldn’t do. I knew I could it.”

That same “can-do” attitude led Wood to the decision to seek the office of State Auditor.

“I was the most qualified candidate,” she exclaimed. “But I had no money and no name recognition. Folks said I couldn’t win; that my chances were slim to none.”

Wood was able to raise $110,000 in contributions for the 2008 election, and she borrowed $60,000 to help with the costs of running a statewide political campaign.

“I traveled in my little car all across this state and told people what I could do as their State Auditor,” Wood recalled. “And I was elected because I refused to give up.”

In that job today, she oversees 43 billion dollars of state money, auditing tax dollars and grants to ensure those funds are applied properly.

Wood also encouraged the RCCC grads to “do the right thing.”

“Remember that integrity is when you do the right thing, even when someone is not watching,” Wood shared.

She told the graduates to not always think that a career is just simply about money.

“If I was in the private sector (as a CPA), my salary would be at least twice what I make today,” Wood noted. “I’ve never made it about money; rather I love going to work every day. If you always make it only about the money, I’ll guarantee you will be miserable.”

In closing, Wood reminded the grads that there is a higher power.

“Always look to God for strength, for guidance and for your direction,” she said. “And make sure, along your life’s path, give something back to your community, the people who got you to where you are today.”

Dezimber Sawyer, president of the Student Government Association, said Friday’s event was what she and her classmates have been waiting for.

“This moment, right here, right now, is what we have been striving for since the very first day of school. Along the way we’ve made memories to last a lifetime,” said Sawyer, who encouraged her fellow graduates to pay homage to their “support system” – their parents and the faculty and staff at RCCC for getting the students to this important stage of life.

“We were encouraged by many along the way when we thought about giving up,” Green remarked. “Anything is possible when you believe. As we aspire greater goals in life after this day, remember all those times when we thought we wouldn’t make it, but we did. I have found strength that I didn’t know I had. Thank you RCCC for impacting our lives for the better.”

In saluting the Class of 2017 at RCCC, the school’s president Dr. Jimmy Tate shared with the audience that he was once in the same shoes of this year’s graduates.

“I too am a graduate of a community college here in North Carolina,” Tate noted. “I’m proud of that because I never realized at that time that one day in my future I would have the opportunity to lead such an institution here at RCCC, one that is proudly celebrating its 50th anniversary.

“I congratulate our graduates of 2017 for their academic achievements that have prepared you for success in life. Today marks a milestone for each of you; one chapter of your life ends and another begins. Roanoke-Chowan Community College has helped shape your dynamics. You now have the credentials in your hands that will help you become competitive in today’s world,” Dr. Tate concluded.

As part of the ceremony, Tate recognized Crystal Saunders as RCCC’s 2016-17 Faculty Member of the Year.