‘Native America at its finest’ 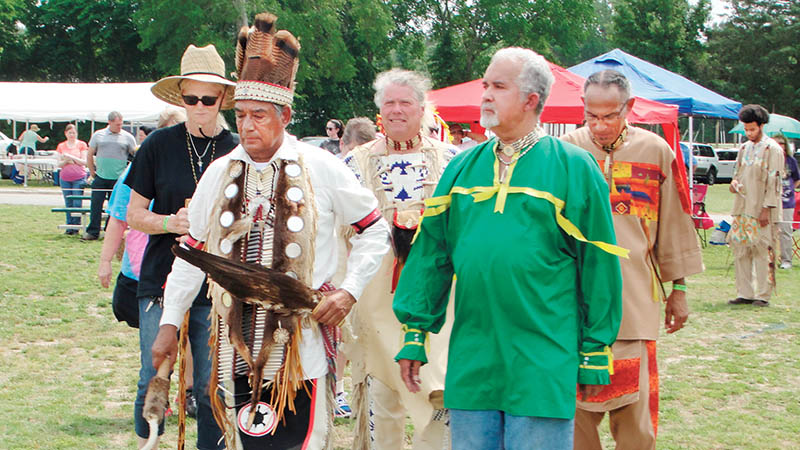 AHOSKIE – You can hear it before you see it. The sound of bells jingling, drums thumping, and people singing. As you get closer, you can see the tents set up around an open area and an audience gathered to watch. In the middle of everything are the dancers, clad in colorful regalia, showing off the culture of their people.

This is the Chowanoke Nation Pow-Wow.

The annual event was held Friday April 28 through Sunday April 30 in the open grassy fields of the Ahoskie Recreation Complex.

Grand Entry kicked off the day’s festivities on a hot Saturday where people came out prepared with their sunscreen, hats, and a few umbrellas for extra shade. Free water bottles were provided by Food Lion, one of the event’s sponsors. Despite the heat, the consensus among attendees was that they were glad it wasn’t raining like previous years.

“See Native America at its finest,” said announcer Aaron Winston in his role as MC for the event as Grand Entry kicked off to the sound of a drum circle providing music and song.

The audience stood in respect as all Chowanoke tribe members dressed in regalia entered the open arena carrying the tribe’s Eagle flag, an American flag, and a POW-MIA flag. With music provided by two drum circles, Smoky River and War Paint, the dancers circled around the arena with the flags before placing them in the front of the open dance arena to be displayed.

After they honored the flags, Winston called any veterans or active military personnel in attendance to join in the next dance to honor the warriors who protect the land and its people. 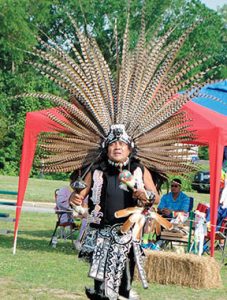 A member of the Aztecs performs a Native American ritual.

Before the dancing continued, Chief Thomas Two Feathers Lewis addressed the crowd with well-wishes for an enjoyable time and encouraged people to feel free to ask questions about the Chowanoke people, their dances, their regalia, or anything else. After Lewis concluded his opening remarks, the dancing began again led by the two people designated as Head Dancers for this year’s event.

“We want to let people know that we’re still here,” Chief Lewis said later, mentioning that members of the Chowanoke Nation are active in the community and many are local business leaders.

“I wish the people of Ahoskie would come and support us like we support them,” Lewis continued as he emphasized that everyone was welcome to attend the Pow-Wow.

A good representation of Chief Lewis’ sentiments could be found in Frankie Red Hawk and Miss T, two vendors who attend the Chowanoke Pow-Wow every year. Red Hawk is from the Tuscarora tribe and Miss T is Haliwa-Saponi.

They both talked about the importance of learning from each other and sharing their different cultures. As people browsed the Red Hawk Traders booth full of handmade jewelry and arrowheads and other Native goods, the two of them encouraged questions and happily answered any in great detail.

It was easy to see that the two main goals of the Pow-Wow were to be a celebratory homecoming for the Chowanoke people and other fellow tribes as well as a learning experience for non-native people.

“Costumes are good for Halloween,” Winston said, explaining the importance of the dancers’ regalia as more like their “best suits” instead of merely costumes anyone can put on.

Each piece of regalia has meaning, and many represent their specific families. Chief Lewis explained that he wears regalia that represents the Eastern Woodland Indians, which looks different than the Plains Indian style typically seen on TV. He made almost all the pieces of his outfit which included parts made of animal hide, bone, and fur. The bells around his ankles were made from deer hooves.

“We dress as an individual,” he said of the variety of regalia on display.

As the dancing exhibition continued, Winston explained the story behind each type of dance. Some, like the Grass Dance, originated from other tribes, while others, such as the Crow Hop and the Potato Dance, were meant to be fun social dances that anyone in attendance could participate in.

“Dances are our stories and our prayers,” Winston said.

Dressed in red, yellow, and white regalia complete with feathers and ribbons, I’noli Hall was one of the Chowanoke who participated in several dances this year.

“Every dance has meaning, and there are so many stories represented from various tribes and families. It’s a beautiful display of our culture,” Hall said.

The Chowanoke Nation hopes to continue to teach people about their culture and to preserve it however possible. The tribe recently purchased some land to be used as Tribal Grounds on Highway 13 near Pleasant Plains Baptist Church. The goal is to use the area as a future meeting place for tribal events as well as another means to educate the community.

The Chowanoke Nation Pow-Wow always serves as a way for the local Native American tribe to connect with each other and the people around them. They look forward to holding the celebration every year.

Hall, who recently moved back to the Ahoskie area after living away for a few years, put it best by simply saying “it’s good to be back in my moccasins again.”