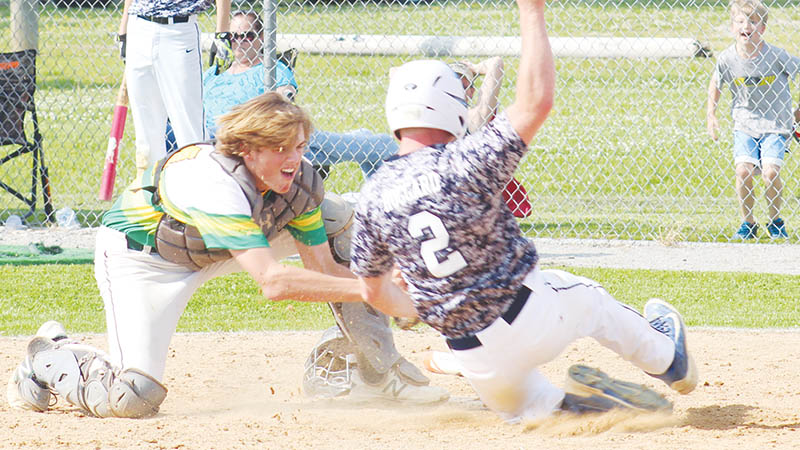 Slade Cowan helped celebrate Senior Day with a 2-for-3 performance, and then recorded the save on the mound to preserve the win for teammate Miller Trowell.

It was Lawrence’s 18th win overall and tenth in Tarheel Independent Conference play.

“These guys know we’re on a mission,” said Warriors coach Jason Wynne. “We had some adversity today, but what I like about this team is that the lower-half of our line-up had to come through, and they did.”

After a scoreless first inning by both teams Cowan led off the second with a single to right field, then went to third base on Jarrett Harrell’s double to left. Cowan then scored on Charles Atkins’ fielder’s choice bunt for the first run of the game as Harrell moved to third. Harrell then tested Rams pitcher Nick Hoggard and stole home for the second score and Atkins scored the third run on an error. It was 3-0, Warriors, after two complete.

Hoggard recovered well enough to strike out the side in the next inning, and keep Lawrence off the scoreboard for the next four-plus innings.

Meanwhile, the Rams knocked starter Trowell out in the sixth with a pair of walks to open the inning. With Cowan now pitching both runners advanced on a passed ball. With the infield drawn in, Bryce Stevens hit a slow grounder as David Basnight scored Ridgecroft’s first run on the fielder’s choice. Todd Lane followed with almost the same play, but this time catcher Wood Trowell dropped the ball. It was suddenly a one-run game at 3-2.

In the bottom of the sixth, Wood Trowell reached on an error, advanced to second on an erroneous pickoff throw, stole third, and scored on Joe “Cheese” White’s grounder. Lawrence was back up by two runs, 4-2.

The Rams didn’t go quietly. In the top of the seventh, Boone Barkley singled up the middle, went to second on Zeb Askew’s bunt, and both runners moved into scoring position on Basnight’s sacrifice. As Hoggard grounded into a fielder’s choice, Barkley scored to make it a one run game with Askew, the tying run, now at third. However, Cowan struck out the last batter and preserved the victory.

Miller Trowell went five innings for the win, surrendering two runs, three hits, and striking out seven. Cowan recorded the last six outs to earn the save for Lawrence while Nick Hoggard took the loss for Ridgecroft.

Atkins and White each had RBI’s for Lawrence while Askew, Lane, Barkley, and Seth Parker had the four hits for the Rams.

“Our younger guys came through for us,” Wynne repeated, “and that was really huge.”

Lawrence earns a bye in the first round of the TIC tournament – which they will host beginning onTuesday. They will play the winner of the Pungo-Northeast first round match.