AHOSKIE – Charles “Tony” Hammond came to Ahoskie 12 years ago with an uncanny knack of getting things accomplished.

He departs the town with a deep appreciation of his abilities.

On Tuesday evening, friends, colleagues and co-workers gathered to bid farewell to the former Ahoskie Town Manager. In return for their kind remarks of his work ethic, Hammond offered his gratitude.

“I couldn’t have accomplished what we did here in Ahoskie without the efforts of our department heads and our great team of employees,” Hammond remarked, his voice trembling with emotion. “They made my job a lot easier.”

As a Navy veteran, Hammond said he knew how to build character and forge lasting friendships.

“Ahoskie is very near and dear to my heart, just like my time in Navy where I had the chance to meet hundreds of thousands of sailors,” he said. “I still correspond with many of them on the phone and on Facebook. That’s how I’ve lived my life….when I make friends, I make them forever.”

“We thank you for all the things you’ve done for our town,” Ahoskie Mayor Jimmy Rowe said as he spoke at the retirement event held at Catherine’s Restaurant.

Veteran Ahoskie Fire Chief Ken Dilday told Hammond that while he and his boss sometimes didn’t see exactly “eye to eye” on some town matters, he respected the decisions that needed to be reached for the benefit of all involved.

“You were fair to my department,” Dilday remarked. “You were good to the town’s employees and we’re all going to miss you.

Dilday presented Hammond with the nameplate that was positioned in front of the Town Manager’s chair on the Ahoskie Town Council podium. And, with the Mayor’s permission, awarded Hammond with a helmet (adorned with #1) from the staff and volunteers with the Ahoskie Fire Department.

“Through Tony’s efforts, we have a new fire station, a far cry from that old building we once used, and all of our (fire) equipment is up to date,” Dilday stressed. “With what we have now I will proudly put our department up against any other fire department in the state.” 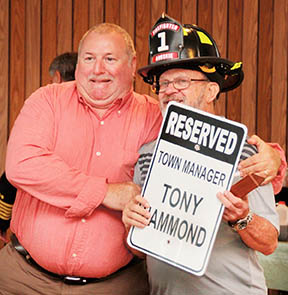 Ahoskie Public Works Director Kirk Rogers said he had the pleasure of working with Hammond for 11 of the 12 years the Town Manager served.

“With Tony, you knew of his desire to get something done because when he sent me an email, there were a hundred exclamation points with it,” Rogers said with a laugh. “I want to return all those exclamation points and wish you continued success at whatever you do down the road. Thank you for all you did for our town.”

Rogers presented Hammond with a small sign that was used to mark the Town Manager’s reserved parking spot at the Ahoskie Town Hall. The back of that sign was autographed by town employees as well as those attending Tuesday night’s retirement party.

“This is a good sign, but it’s a bad sign to see Tony go,” said Stewart White, who directs the town’s Wastewater Department and treatment plant and has worked for the Town of Ahoskie for 27 years. “I hate to see him go.”

White recalled that before the town’s new wastewater plant opened, Ahoskie could not experience any growth due to being placed under a moratorium by the state (because of the town’s limited ability to store and treat sewage).

“Tony and the town’s engineers led an effort to build our new treatment plant, which by the way is the best one in the whole state,” White said.

He added that Ahoskie has spread its wings and flew high under Hammond’s leadership, referencing not only a new treatment plant, but a new police station, fire station and recreation park.

“Yes, they cost a lot of money, but that type of progress was needed in this town,” White remarked. “If not, we would have sat around, grown old and not have anything to show for it. Tony brought about a lot of change for this town and we’re better off for it.”

“I was on the Council for 29 years and the best decision we made over that time was to hire Tony Hammond,” Suiter said. “We had a lot of problems when Tony first joined us and the things he did were great for this town. In my time on the Council we had six mayors and three town managers and none of them were like Tony Hammond.”

“I was on that Council who brought Tony here,” said Gatling. “Buck is right, we had a lot of issues at that time. We were under a moratorium for our wastewater treatment plant and we badly needed a new police station and fire station in order to get them out of that little building they shared together. And we had that big area that had flooded behind the hospital to deal with, a project that became Tony’s baby and look at it now (the Ahoskie Creek Recreation Park and Amphitheater).

“Tony came in and tackled all of those issues; he brought us a plan,” Gatling continued. “Tony just didn’t come here with a vision to leave, he came here and made Ahoskie his home; like he had been here all his life. He got the job done.”

Gatling also praised Hammond for initiating a much-needed change in the salaries earned by the town’s employees.

“We were losing employees to the county and other places because of the way our salaries were structured at that time,” he recalled. “Now, with salary increases and incentive bonuses, we raised the bar. Our employees are staying in place and working as a team and this town took off and grew….and we can thank Tony Hammond for that.”

Former Ahoskie Councilman Malcolm Copeland noted that Hammond was a man of many talents.

“He was very resourceful; if he didn’t have an immediate answer to a question or was looking for ways to tackle an issue or problem, he knew the resources he could turn to for help,” Copeland stated. “He had a lot of good and progressive ideas.”

“You came here and took the bull by the horns,” he said. “You were responsible for our growth. I appreciate the work you’ve done.”

“I’ve never had a person to answer a question before it was asked,” added Mayor Rowe. “But that’s what you got with Tony Hammond.”

“He was a town manager, a friend, and a dad to many of us,” said Ahoskie Police Chief Troy Fitzhugh. “But most of all, he was our leader and he has led this town to new heights. I’ll miss him.”

Prior to that, Hammond was a career Navy man, serving for 29 years (1968-1997), retiring as a Master Chief. While in the Navy, Hammond indirectly supervised 2,400 medical personnel and oversaw a $2.4 million budget.