The win moved the Warriors to 10-0 heading into their game today (Thursday) at Hobgood Academy and Friday’s league showdown for first place when they travel to Terra Ceia.

Trowell went the distance for the victory Monday allowing just three hits over seven innings and induced a groundout from the Raiders’ Archer Johnson to end the game. 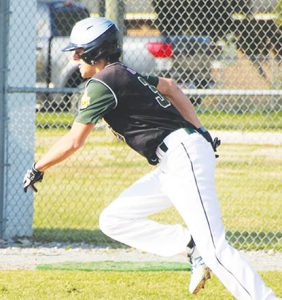 Lawrence Academy’s Miller Trowell bolts out of the box after slapping a base hit in a recent game. Trowell drove in three runs and pitched a shutout as the undefeated Warriors crushed Pungo 10-0. | Photo by Annie Wilson

An early lead in the second inning helped get the Warriors on the scoreboard. Charles Atkins walked, went to second when Slade Cowan reached on an error, stole third, and scored on Joe “Cheese” White’s single on a 0-1 count to left field. Lawrence took the lead 1-0 after two.

The Warriors blew it open in the fourth with five big runs. A single by Nixon Rascoe scored one run, a double by Austin Wynne brought home two more, and a single by Miller Trowell also scored two for a 6-0 Lawrence lead.

Single runs in the fifth and sixth innings and the final two in the seventh accounted for all the remaining scoring for Lawrence.

Lawrence collected nine hits. The Trowell brothers, Miller and Wood, had two hits apiece, while Wynne, Atkins, Cowan, Rascoe, and White had the other safeties for the Warriors. Miller Trowell also drove in three runs.

Lawrence also played error-free baseball on the afternoon as they didn’t commit a single error in the field. Trowell had the most chances with six.

The Warriors also stole nine bases during the game as three players stole more than one. Wood Trowell led the way with three while Cowan and Brian Hughson swiped two bases each.