GOLDSBORO – Jarrett Harrell crushed a three-run homer in the first inning, then earned the win in relief by pitching a pair of scoreless innings as Lawrence Academy defeated Wayne Country Day here 8-7 on Thursday.

A bases-loaded walk to Slade Cowan with the game tied at 7-all proved to be the game-winner for the Warriors.

The win was a possible preview of the NC Independent Schools’ 1A state baseball championship later this spring; and it also kept Lawrence’s record perfect at 9-0.

Austin Wynne drew a one-out first-inning walk to open the contest for the Warriors. Miller Trowell then drilled a shot to right field before Harrell stepped up and blasted a moon-shot over the wall in left-centerfield for a 3-0 Lawrence lead after just a half-inning of baseball. 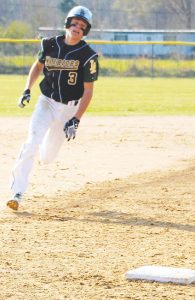 Lawrence Academy’s Miller Trowell rounds third base in an earlier game. Trowell had a pair of hits and drove in a run Thursday as the Warriors came from behind to down Wayne Country Day School, 8-7. | Photo by Annie Wilson

Wayne Country Day got two of those runs back in the bottom of the second inning when Avery Browning singled, stole second and came home on Tanner Willman’s double. Willman would score on a LAW error and it was 3-2, Warriors, after two.

The Chargers picked up five runs in the bottom of the third inning when they sent ten men to the plate. WCD’s big inning was driven by a single by Browning, a single by Zac Barfield, and a double by Case Kermode. That hit-parade put Lawrence in a four-run hole, trailing 7-3 after three.

Following a scoreless fourth inning, Lawrence got one run back in the top of the fifth when Wynne walked, took second on an error, stole third, and scored on Charles Atkins’ groundout. However, the Warriors still trailed, 7-4, after five.

The sixth inning proved the charm as Lawrence strung together four more runs to win it. Wood Trowell was hit-by-a-pitch, after which Cheese White walked, and Nixon Rascoe was also hit to load the bases. DaQuan Wilson then walked in a run in Trowell for an RBI. Miller Trowell then singled to left to score White and Jarrett Harrell’s walk brought in Rascoe with the tying run. The Chargers surrendered a fly-ball out before Cowan’s base-on-balls produced Wilson with the game-winner.

Harrell then came on in relief and earned the win for the Warriors as he went two innings, surrendering no runs, a hit, no walks and he struck out four. Amane Godo took the loss for Wayne Country Day. He pitched two innings, allowing zero runs, three hits, and striking out two.

The Warriors had seven hits in the game. Miller Trowell and Wilson collected two hits each while Wynne, Harrell, and Rascoe had the others. Harrell also had three RBI thanks to the home run.  Wayne Country Day collected eight hits.

Lawrence ended their four-game road swing yesterday (Monday) at Pungo in a game that ended too late for press-time.   The Warriors will host Hobgood in Merry Hill Thursday before their Tarheel Independent Conference first-place showdown at Terra Ceia on Friday.