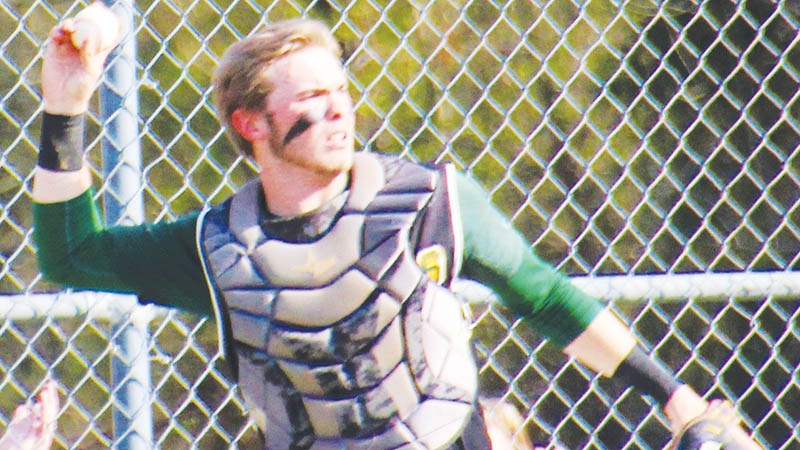 Lawrence Academy catcher Jarrett Harrell attempts to throw out a runner in a previous game. Only one runner stole on Harrell Friday as the Warriors blanked Northeast Academy 8-0. | Photo by Annie Wilson

MERRY HILL – Lawrence Academy picked up its second shutout in as many games here Friday with an 8-0 blanking of Northeast Academy. Three Warrior pitchers combined to throw a shutout with Jarrett Harrell striking out Nick Tevino to finish off the game.

Ryan Rowe singled for Northeast in the top of the first, but he was erased with a double play; and Josh Byrd, after drawing a base-on-balls and reaching third, was stranded there when a groundout ended the inning.

The Warriors scored first when DaQuan Wilson walked, stole second, and scored when Austin Wynne blooped a single on an 0-1 count.  Wynne later scored Lawrence’s second run on a groundout by Wood Trowell after Jarrett Harrell had walked. Charles Atkins reached on an error that allowed Harrell to score. After Slade Cowan singled and Miller Trowell walked, a groundout by Nixon Rascoe scored another run, and Cowan came home on a passed ball for a 5-0 Lawrence lead after the first inning of play.

The Warriors picked up single runs in the fourth, fifth, and sixth innings and left the rest of the result up to Lawrence pitching.

Slade Cowan earned the win after he went four innings, surrendering zero runs, two hits, and striking out five. Miller Trowell followed Cowan on the hill and threw two innings with three strikeouts. Harrell threw the seventh and also posted three strikeouts, all helping Lawrence to finish off the victory.

Austin Bradley got the other hit for the Eagles while Peyton Galloway took the loss for Northeast. He pitched three and two-thirds innings, allowing six runs, four hits, and striking out one.

Rascoe and Trowell each drove in two runs to lead the Warriors.  Lawrence is now 6-0 overall and tied at 3-0 with Terra Ceia Christian for the lead in the Tarheel Independent Conference.

Lawrence next plays six straight games on the road.  It began Monday with a late road tilt with Ridgecroft that wasn’t finished by press-time.  The Warriors then play the return game with Northeast in Lasker on Wednesday before ending the week – and the month of March – out of conference on Thursday in Goldsboro against Wayne Country Day.  They’re not back in Merry Hill until Apr. 10 against Terra Ceia.