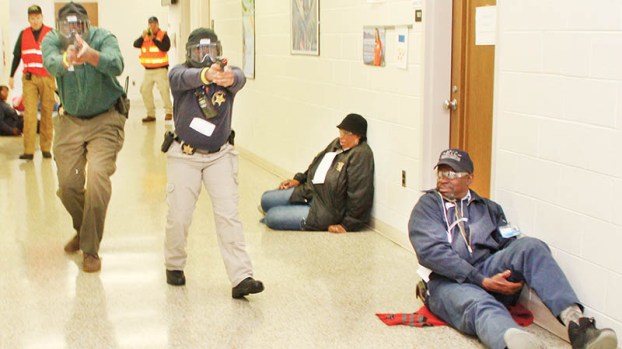 As “victims” line one hallway inside the Jernigan Building at Roanoke-Chowan Community College, these two law enforcement officers begin the process of searching for the “shooter” during Saturday’s live drill. | Staff Photos by Cal Bryant

This is only a drill

AHOSKIE – Some screamed in pain; others lay motionless on the cold floor of the main hallways of the Jernigan Building on the campus of Roanoke-Chowan Community College here Saturday morning. 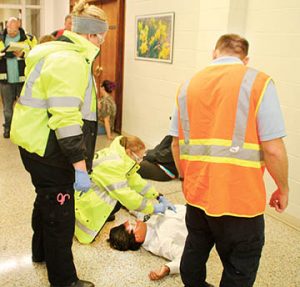 Hertford County EMS personnel evaluate the medical condition of one of the “victims” that was assaulted during the fictional mass shooting.

As the first two lawmen entered the side door at the front right corner of the building, one can be heard in a loud voice communicating with emergency dispatchers, “we have numerous victims here, all appear to have been shot; we need more help here.”

A shade over one minute later, that law enforcement officer was shot down as they, with a weapon drawn, carefully maneuvered down a hallway.

A hail of gunfire followed between a suspect and the chief of the RCCC campus police force. Luckily, the officer’s marksmanship was better than that of the suspect, who fell in a crumbled heap on the same cold floor.

Fortunately, this entire scenario was just a drill, even though it had an eerie feeling of the real deal.

All totaled, 21 local agencies from all four Roanoke-Chowan area counties participated in the three-hour drill. That included Roanoke-Chowan Community College who used the opportunity to work out any possible kinks in their crisis plan.

“There was a lot happening today really fast,” said Smith. “And, to think, this was just a drill. Just think what it would have been like had this was real. In the aftermath, there would have been a rush of parents and family members trying to access this campus to check on their loved ones. The media – local, regional and national – would be here, asking tons of questions. Our own hospital would be overrun with family checking on the condition of the survivors. There’s so much to deal with that wasn’t a part of this plan.”

However, for the purpose of the event, Smith said there were lessons to be learned.

“Hopefully all of you learned from this,” Smith said as he addressed those assembled in the Jernigan Building auditorium for a debriefing. “The evaluators that observed our actions took notes that they will share. I encourage you to read their notes and heed the advice. I can be honest and say that there were some things that I saw we needed to work on and that came before we even started the exercise. We need to identify the things we need to work on.” 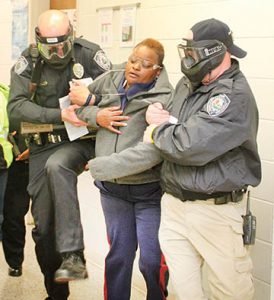 After securing the building, these two police officers assist one of the “victims” to a triage area set up outside the Jernigan Building.

After the “shooter” had been neutralized, law enforcement officers from various local agencies performed a room-by-room search of the Jernigan Building to ensure he did not have an accomplice. Once that information was ascertained, Hertford County EMT’s, accompanied by heavily armed law enforcement officers, began the task of attending to the medical needs of 30-plus victims. Some were only grazed by the gunman’s “bullets” while others were discovered to be in serious condition. A few were pronounced DOA.

All were marked with color-coded tags that revealed their level of injury. A red tag signaled a life-threatening injury, and they need to be evacuated immediately. A black tag meant a death; while other lighter shades were a sign of non-serious injuries.

Despite Saturday’s cold, damp weather, a makeshift triage area was set up in front of the Jernigan Building. There the shooting victims were treated in order of medical importance prior to being transported to Vidant Roanoke-Chowan Hospital in Ahoskie.

“This was my first-ever time in a drill such as this,” said Hertford County’s new Sheriff Dexter Hayes. “Something like this really heightens your awareness of the importance of being prepared to handle an event of this magnitude. I was outside as part of IC (Incident Command) and I saw some things that we need to work on to become better in handling a mass shooting event. I pray that we never have to use these skills, but we always need to be prepared and have a finely-tuned plan to handle such a situation should it arise here in Hertford County.”

“During an event like this, communication is the key. In a real world situation, the left hand needs to know what the right hand is doing,” said Hertford County Sheriff’s Chief Deputy Will Liverman.

“An exercise such as this is designed to test current plans and protocols. If that plan could not be carried out as expected, then that is when we have the opportunity to make those adjustments before, pray tell, an actual event occurs,” Smith said.

“This allowed all the agencies involved today to discuss agency protocols and plans,” he added. “It also provided an opportunity to discuss each agencies capabilities.”

“It took a lot of planning on behalf of all the agencies to pull this off,” Smith stated. “Not only did we need a lot of staff to respond to this mock disaster, but we had to ensure regular duties went on as well. All these agencies did a wonderful job with that.”

By KIM BUNCH HOGGARD Correspondent   AHOSKIE – It was an event with a very appropriate name. The Easter Seals... read more