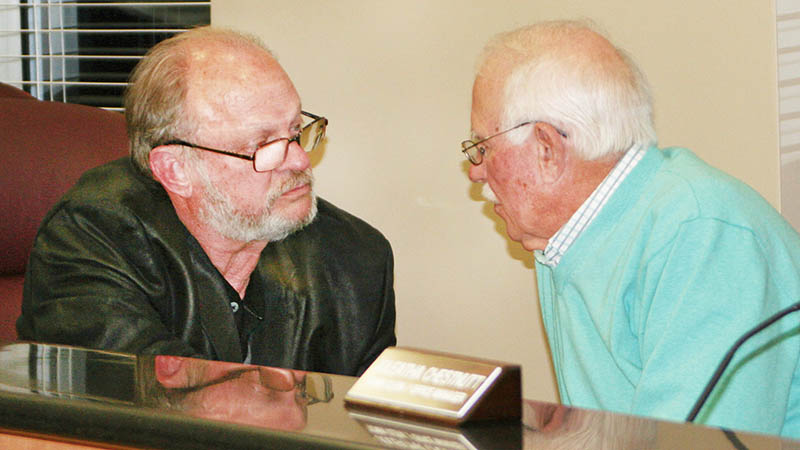 The move ends nearly 13 years of service in town government for the former U.S. Marine, who says it was not an easy decision.

After meeting with his department heads, Hammond reported back to Council in February that all departments had reviewed their budgets and made recommendations of a 10 percent cut, and that he and the town Finance Officer, Patricia Bradley, had found more cuts; all in an effort to bring the budget in line.

The Council then passed three proposed budget amendments that would decrease both the town’s revenues and expenditures by roughly $850,000.

Tuesday’s proceedings were not without its own high drama.

At the close of the Council’s regular agenda, Mayor Jimmie Rowe uttered just two words and Hammond rose to his feet.

Hammond walked the length of the Council bench, distributing a plain unmarked business envelope, one by one, to each council member and to the press table. He had just a single, lone instruction.

“Please don’t open these until I give these all out,” he intoned.

After a quiet murmur from the gallery, there was the low sound of shuffling as the enclosures were opened and a lone voice rose from the assemblage.

“Please speak plain so we can hear your comments,” someone said.

“I make a motion we go into closed session,” Blackburn said quietly.

The council chambers emptied, temporarily, but none of the assembly of more than 30 – mostly department heads of various town services – left the Fire Station. Most milled about in the foyer chatting and whispering among themselves.

Following the recess of nearly 30 minutes, the executive session ended and people once more filed into chambers. The second open session began with the additional new business:

“Council has read Mr. Hammond’s letter of resignation, and do I have a motion to accept,” said Rowe.

Councilman Rev. C. David Stackhouse made the motion, but changed the wording.

“As mayor pro-tem, I move that we accept the letter of resig – of retirement – of Town Manager Charles A. “Tony” Hammond effective upon the arrival of an interim (manager) from the North Carolina League of Municipalities,” Stackhouse announced.

The motion was seconded by Blackburn.

The League of Municipalities assists the more than 540 towns and cities in the state with government services. They are strictly non-partisan and advocate merely on the side of strong, sound, municipal government.

Before the vote, Rowe offered a correction, “I meant to say retirement, not resignation.”

Afterward, several council members offered words of praise and thanks to the outgoing manager.

“I appreciate my time serving Mr. Hammond,” said Stackhouse. “His door has always been open and he’s been a tremendous help to me and to my constituents in Ward-B in getting things done and getting many things accomplished; and in understanding the workings of government. I did not understand many things myself like water bills, and the connection with water bills, and things like basic trash pick-up in the city.”

Stackhouse went on to say he often approached Hammond with citizens from within and outside his district, and he was grateful for the open-door policy.

“Mr. Hammond would always sit down and talk with us, and we would work it out,” Stackhouse observed. “I appreciate you, your friendship and your loyalty to this town councilman.”

Blackburn followed with her comments, at first stumbling to find the words; and also making a surprising announcement of her own.

“Tony came when I became mayor,” she began. “Now I’m ending my term on council this year because I’m not running for re-election. I am grateful to have had you on this journey with me. I know a lot happened, and you have a job that I would never take because it’s such a true lock; and for me personally, I’m grateful we were there together.”

“I’d like to say thank-you, Tony,” said Rowe. “I want everyone to know I’ve never worked with anyone that … well, you can see, our meetings usually last about an hour, and that’s only because Tony has everything already laid out for us; and the only time anybody can’t answer his questions (is when) they probably didn’t read the agenda, because he’s already answered all their questions in the agenda. He’s very good at that and I appreciate it. I’ve enjoyed working with you; I know we don’t agree on everything, but who does?”

“It’s been a pleasure to work with you, Tony,” said Jones. “You’ve been very professional and helpful to me. You’ve given a response when I needed a response, guidance when I’ve needed a little guidance, and I appreciate it.”

Finally, Hammond spoke, fighting through what was obviously a very emotional moment for him.

“Next to retirement from the military, this is the next hardest thing I’ve ever done,” Hammond acknowledged. “This is probably the greatest group of people I’ve ever worked with in my entire life.”

The meeting neared a close, but not before Stackhouse recited a bit of poetry:

“And I’m gonna live to be a hundred-and-eight,” injected Hammond, as light laughter swept the room.

Councilman Charles Freeman made a motion for adjournment, which was seconded and unanimously passed. As they departed, several members of the gallery strode to the bench to offer kind words and to shake Hammond’s hand.