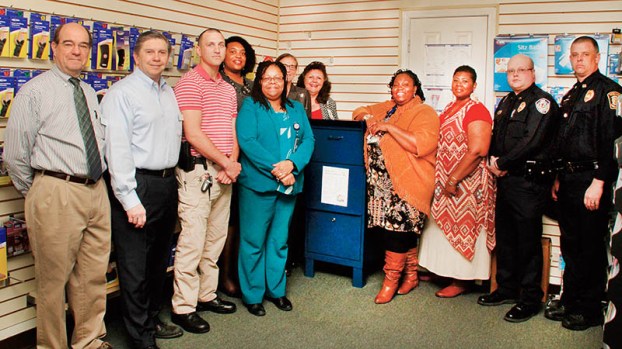 Saving lives………..one pill at the time

AHOSKIE – Those raised within a faith-based environment know the story of Lazarus.

The book of John, chapter 11, tells the story about Jesus raising a man by the name of Lazarus from the dead. Now, centuries later, a local organization is using the same name in an effort to prevent accidental death.

The Hertford County Project Lazarus Coalition has been formed as a non-profit community association of various agencies and organizations working in unison to prevent overdoses of prescription medication.

Using money from a grant, the Coalition has installed two drop boxes, one each at Colonial Pharmacy in Murfreesboro and at Mizelle’s Discount Drug in Ahoskie.

These boxes serve as an effective way to reduce the number of medications that are misused or fall into the hands of innocent children. Those with old, unused medication, especially those products that can lead to addiction, are urged to use these drop boxes. No questions are asked.

The grant also paid for 60 Naloxone Rescue Kits, an injection administered to the victim of a drug overdose that works as an antidote to block opioids from the brain’s receptors, thus allowing victims to be revived. Those kits were distributed among Hertford County Emergency Medical Services, the Hertford County Public Health Authority, and the Hertford County Sheriff’s Office. 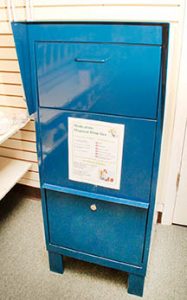 A closer view of the drop box; two of which have been placed in Hertford County (the other is at Colonial Pharmacy in Murfreesboro).

Since 2012, there have been two “all prescription” opioid overdose deaths in Hertford County.

Once the prescription medication is deposited into the drop box, Vidant R-CH staff are responsible for collecting those drugs and discarding them in a safe manner.

“The Vidant Police Department takes these items to a medical incinerator where they are destroyed and forever out of the hands of those who may abuse those drugs,” said Susan Brinkley, an RN and Master of Science in Nursing at Vidant R-CH.

The introduction of the Project Lazarus drop boxes is timely along with the recent announcement of a bill in the North Carolina General Assembly that addresses the rapid rise in drug abuse, specifically the sharp increase in heroin and prescription opioid abuse.

“It’s a serious problem all across our state as well as nationally,” said Lisa Newsome, Director of Marketing and Community Relations at Vidant R-CH, referencing abuse of opioid-based prescription medication.

Recently, a three-month undercover investigation into the illegal sale of prescription drugs in the Roanoke-Chowan area resulted in the arrest of 22 individuals. Covert street-level purchases from these persons totaled 890 Oxycodone and Dilaudid pills totaling in excess of $8,000.

One DEA officer involved in the undercover investigation noted that, “They (those arrested) are our neighbors and people we come into contact with every day. The abuse of prescription drugs affects all socioeconomic levels in the Roanoke-Chowan area.”

To assist in a national effort to lower the risks of abuse, Art Minton, owner of Mizelle’s Discount Drugs, said the DEA has placed a cap on the production of hydrocodone.

“For 2017, prescription drug manufacturers are limited to 65 percent production of that product from what was manufactured in 2016,” Minton stated. “That affects doctors in a big way. If they don’t change their prescribing habits, they’re going to prescribe a product that their patients can no longer get.”

Minton said there are alternatives to pain relief, to include topical, and patches.

Those seeking assistance with pain management can contact the Vidant Pain Care Center at 252-209-3360 or support programs and case management offered through Vidant Roanoke-Chowan Hospital (252-209-3475).

Coal ash sites are no stranger to N’hampton

JACKSON – VistaGreen is apparently not the first entity seeking to store coal ash in Northampton County. According to research... read more