RALEIGH – It was a record-breaking effort.

The North Carolina Press Association announced the winners of the 2016 Advertising, News, Editorial and Photojournalism Contest during its annual meeting and Winter Institute held March 9-10 in Raleigh. There, the ad and news staff of the Roanoke-Chowan News-Herald earned a total of 11 awards.

“I am so proud of the good work done by our talented and hard-working staff, and am thrilled to see them recognized for their efforts,” said News-Herald publisher Tony Clark. “The fact that these accolades are bestowed by our peers and colleagues makes it even more rewarding. Of course we do the work because we care about serving our community. But having that work honored is just icing on the cake.”

The 11 awards represented the highest total ever won by the Roanoke-Chowan News-Herald in a single year. 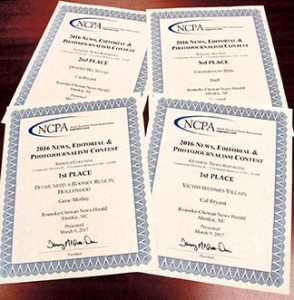 News-Herald ad and page designer Crystal Parker was the big winner as she captured five individual awards for her outstanding work and had a hand in a sixth award.

She picked up a pair of second-place awards: Best Food Ad (for her work on the Baker’s Peanuts ad that is published in our newspaper), and Best Use of Color (for the Red Barn Market ad).

Her hard work also played a big role in the R-C News-Herald being honored as the second place recipient for Best Special Section (in the Advertising division) for our 2016 Breast Cancer Awareness tab.

On the News and Editorial side of the contest, the Roanoke-Chowan News-Herald captured four awards.

Cal Bryant won two in the same division: first and second place in General News Reporting. First place was for “Victim becomes villain” (from Jan. 28, 2016 where this newspaper covered the unethical conduct of local elections officials and a breakdown of legal processes after an unsuccessful campaign for a seat on the Ahoskie Town Council led the State Board of Elections to order a new election); and second place for “Divided We Stand” (from March 26, 2016 about the stance of the R-C area’s state legislators over the controversial House Bill 2 – transgender bathroom issue).

Gene Motley won a first place award in the category of Serious Columns. His trio of winning entries were: “Do we need a Rooney Rule in Hollywood” (from Jan. 23, 2016); regarding Spike Lee’s threat of a boycott of the 2016 Academy Awards presentation over the lack of diversity among the nominees); “Making mistakes: We’ve all been there” (from June 4, 2016 where Gene took a deep look at all the flack aimed at the mother of a child who was blamed for letting her child wander too close and eventually fall into a cage at the Cincinnati Zoo that resulted in the shooting death of a Silverback gorilla that had, as most wild beasts will do, encountered the child); and “Stand or sit? I have the right to do either” (from Sept. 3, 2016 that detailed the national fallout in the aftermath of NFL quarterback Colin Kaepernick taking a knee during the playing of the National Anthem).

Only three winners are named in each category within each newspaper division. There were over 10,000 combined entries sent in from NCPA members statewide.

The RC News-Herald staff is no stranger to NCPA awards. In 2012, the news staff was judged in first place for Best Community Coverage category. Four years prior, the staff earned second place in the Special Sections category for “OLF, Looking for a Place to Land”, a 12-page tab devoted entirely to the plans being developed at that time by the U.S. Navy to construct a highly controversial Outlying Landing Field (practice facility) at one of five sites in northeastern North Carolina and southside Virginia.