Fit to be tied!

MERRY HILL – After suffering through a tie-score in their first game that ended deadlocked after being called for darkness, Lawrence Academy finally saw the sunshine.

The Warriors got on the winning track last week with their first two wins of the season: an 11-1 Tarheel Independent Conference triumph over Pungo Christian Academy, followed up with a 13-9 road win over Gates County.

On Thursday Jarrett Harrell went four-for-four and scored three runs in the 10-hit rout of the Raiders. Harrell paced the Warriors with three of the team’s four doubles. Teammate Wood Trowell went three-for-four, had the other two-bagger, and also scored three times. Austin Wynne, Hosea Wilson, and Slade Cowan had the other hits for Lawrence.

Ben Simmons got the lone hit for Pungo. 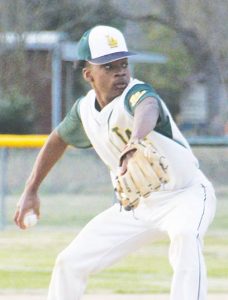 DaQuan Wilson earned the win on the mound. He threw three and two-thirds innings, surrendering one run on one hit and striking out five.

Brady Hudnell took the loss for Pungo. He tossed one inning, allowing three runs, one hit, and striking out one.

Wilson opened the scoring for Lawrence with a walk. He then stole second, was sacrificed to third and scored on Wood Trowell’s sacrifice bunt. Later in the inning, Harrell cracked his first double, and then scored two batters later on a bases-loaded walk for a 2-0 Warriors lead.

In the second inning back-to-back doubles from Harrell and Wood Trowell produced three more runs for a 5-0 lead.

After picking up two more runs in the fourth, Lawrence put it out of reach with four runs in the fifth on a bases-loaded walk, a passed ball, and a couple of RBI base hits.

The win made Lawrence 1-0 at the time and left them a half-game behind in the TIC under first-place Terra Ceia (2-0), who picked up their two wins last week over Ridgecroft and Northeast.

On Friday, Lawrence and Gates County traded the lead back-and-forth, but eventually the Warriors prevailed 13-9 when the Warriors took the lead for good in the seventh inning.

Gates County evened things up in the bottom of the frame to knot the game at 4-each after one complete.

The Red Barons took the lead in the bottom of the second when Olsen doubled and scored on Jordan Brinkley’s RBI base hit. Gage Riddick got Gates’ other run thanks to a pair of errors and he later scored on a balk call to make it 6-4, ‘Barons.

Lawrence got one of those runs back in the top of the third when Hosea Wilson walked, went to second on a single by Cowan, and scored two batters later on a bases-loaded walk.

Gates added another run in the bottom of the fourth when Olsen tripled and came home on a double-steal call by Gates coach Jacob Harrell. That made it 7-5, Gates.

Lawrence captured the lead again in the top of the sixth when back-to-back base hits and a walk loaded the bases. Wood Trowell then doubled-in all three runs. He would score later on a sacrifice fly to make it 9-7, Lawrence.

Gates tied it again at 9-9 in the bottom of the sixth on an error and a run-scoring single by Braxton Newsome.

In the top of the seventh Cowan scored when Austin Wynne was hit by a pitch with the bases loaded. Wood Trowell the delivered a couple more with a two-RBI double and Harrell doubled in the final run for a four-run, 13-9 lead.

Jarrett Harrell earned the win for Lawrence. He tossed the final two innings, giving up two runs, two hits, striking out three, and walking one – but shutting the ‘Barons down in the bottom of the seventh. Hunter Mitchell took the loss for Gates County. He only went one-third of an inning, in relief of Rick Neathery, but accounted for the hit-batsman.

Lawrence (2-0) hosted Pasquotank yesterday (Monday) in a game not complete at press-time. They are at Terra Ceia Thursday in a showdown for first-place in the TIC before heading to Kinston for a pair of games at Parrott Academy on Friday with Wayne Country Day followed by the rematch against Gates County in the second game.