Hertford County got on the board first with three runs in the bottom of the first inning. Tyrek Beverly drew a walk and later scored on a Chuck Lee sacrifice fly for the first run. After Bradley Edwards singled and Trevor Lee walked, Edward Bradley delivered both runners with a two-run double. The Bears were in front 3-0 at the end of the first complete inning of baseball.

Gates County jumped in front with four runs in the top of the third thanks to the “long-ball”. The first two runs came in on a Ron Olsen two-run home run, and that was followed later by a two-run shot off the bat of Gage Riddick for a 4-3 Red Barons lead after three complete.

Hertford County tied the game up in the bottom of the fourth on a Beverly RBI fielder’s choice. That knotted the contest at 4-4 after four.

It was the Bears back in front in the bottom of the fifth inning on an Edward Bradley RBI double for a 5-4 margin for the home team. 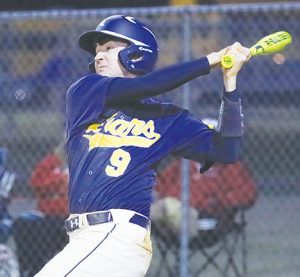 But back came the ‘Barons as they picked up two more in the top of the seventh. Again it was round-trippers that did it for Gates County: Jordan Brinkley stroked a solo home run and later Riddick swatted his second long-ball of the night – also a solo mark – that made it 6-5, Red Barons.

Their backs against the wall with a large opening night crowd on hand, Hertford County came through as Evan Lassiter joined the hit parade with a solo home run that tied the game after seven regulation innings at 6-6.

After a couple of scoreless innings, and free baseball for the fans, how else could the night end but by “dialing long distance”. In the top of the tenth, Brinkley took a Kole Liverman offering and parked it over the left field fence with a man aboard in what proved to be the game-winning two-run home run. Hertford County could not answer in their half of the inning and suffered a crushing loss before a gracious and raucous home crowd.

Gates County had 15 hits, Olsen, Brinkley, and Riddick had three hits including the pair of home runs by Brinkley and Riddick. Rick Neathery had two hits for the ‘Barons.

D.J. Smith picked up the win in relief of starter Hunter Mitchell. Neathery and Brinkley also pitched for Gates County.

Liverman took the loss for Hertford County after Trent Munford started for the Bears.

Hertford County (0-3) played at Northampton County last night (Friday) in a game not completed by press-time. Gates County (2-1) hosted Lawrence Academy Friday – that game also was not finished when we went to press.