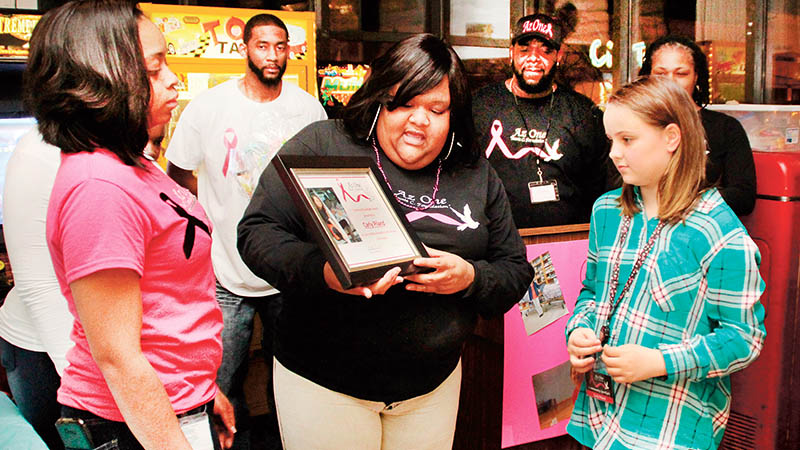 Sheena Lyles (center) and Brittany Tann (left) are joined by other members of the Az One Foundation as they present the organization’s first-ever Community Service Award to Carly Piland of Ahoskie. | Staff Photos by Cal Bryant

AHOSKIE – When the newly created non-profit Az One Foundation presented its first-ever Community Spotlight Award on Feb. 24, the organization set the bar high for others to follow.

As published in the Feb. 25 edition of the Roanoke-Chowan News-Herald, Piland used a $150 gift card that was on her Christmas 2016 “wish list” to Santa plus another $50 in cash as a present from her grandparents to purchase items that she donated last month to the Ahoskie Food Pantry. 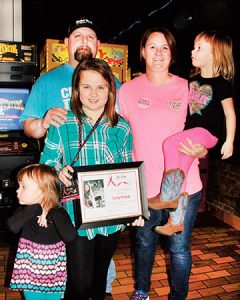 Award recipient Carly Piland is shown here with members of her family – parents Clay and Tammy, and twin sisters Casey and Cally.

Apparently, Piland’s “heart of gold” attracted the attention of the Az One Foundation who, in turn, recognized the young girl for her efforts to help others.

“We selected Carly Piland for our first-ever award because she touched all of our hearts with her heart of passion to help others. She exemplifies exactly what Az One seeks to do,” said the organization’s founder, Sharmaine Lee Thompson

“Carly reminds me of me when I was her age,” Thompson added. “I remember seeing those people down on their luck just standing around. I would beg my grandmother for a dollar so I could give it to them.”

Speaking directly to Carly, Thompson encouraged the young lady to join with Az One in helping to make a difference in the local community.

“We’ll come and pick you up and take you back home,” Thompson said. “We will adopt you as one of ours.”

The Az One founder also offered praise to the young girl’s parents, Clay and Tammy Piland, and grandparents, Sherwood and Brenda Overton, for their efforts to shape and mold her bright future as a community volunteer.

“For someone outside of our immediate family to acknowledge Carly for her deeds is quite an honor,” said a proud Tammy Piland. “This is the second year she’s done this. This is not something her father or I told her she had to do. It all started with a letter to Santa she wrote two Christmases ago. She told him she wanted a few things of her own, but what she really wanted the most was to bring toys, money and food to those who needed it. I had no idea she had even written that letter until she brought it home from school.

“She got what she asked for from Santa that year, to include a gift card to Food Lion where she and I went and purchased items for the Ahoskie Food Pantry,” the mom continued. “This year she asked for the same thing. And what’s so amazing is she is a smart shopper….she looks for deals; she uses coupons.

“Carly is an amazing young girl. She shares the love with others that she holds in her heart. She’s only 10 and she has a lifetime to make a difference in our community,” Tammy Piland concluded.

“On behalf of the Az One Foundation, we congratulate Carly Piland for her efforts to help the Ahoskie Food Pantry. This young girl has the heart and the passion to give back to her community,” said Thompson.

Other ranking officials with Az One also congratulated Carly Piland.

“Our mission is to give back, and Carly is a standard bearer for that mission; we share the same vision,” said Mike Thompson, president of the organization.

“I hope other young people will do what Carly has done for our community,” stated Az One Vice President Darlyn Robertson. “Carly represents our future, the future of our community.”

“Carly, I need you to find about five to ten of your friends and bring them onboard with what you do for the community,” noted Jennifer Brown, Business Manager for Az One. “We all can do great things when we serve together. With kids like you, we can bring our community together and do great things.”

Az One presented Piland with several items in recognition of her earning the organization’s first-ever Community Service Award, to include a plaque, gift card, and gift bag.

“Thank you for recognizing me. The reason I do this is that I realize I have everything I need and there are others that don’t. So I wanted to give to those who are in need,” said Carly in accepting her accolades.

Sisters with a Vision, another local non-profit social club that works with teens, was represented at the event. They donated a gift card to Piland for use on her next shopping trip to benefit the Ahoskie Food Pantry.

“The thing about being a public servant is you must put yourself on the backburner to help other people,” Hayes stressed. “I can see the love this young girl has in her heart. She has the heart of a champion. She has compassion, drive and motivation, so much to the point where she is an inspiration to me.

Az One was organized in October of last year in honor of Sharmaine Thompson’s grandmother who passed away in 2012 from breast cancer. Its mission is to influence and empower families impacted by cancer as they transform local communities.

“Our purpose is to simply uplift our community,” Thompson said.

The Az One Community Spotlight Award will be presented four times a year. The award seeks to recognize local individuals who contribute selflessly through their deeds in the local community.

“We realize than none of us can do this alone, it takes a collaborative effort. That’s why the Community Spotlight Award was created, one that honors and celebrates those who are out in our community making a difference, no matter how big or how small,” Thompson concluded.