GATESVILLE – Robert Walker epitomizes more than a ‘hard-work ethic’. The three-sport star (football, basketball, and track) at Gates County High School leads quietly, but efficiently, for his various teams, and now it’s paid off with his scholarship offer to play football at CIAA member, Chowan University.

Walker spent his three-year varsity career as a starter, and a two-way – offense and defense – starter his final two seasons with the program.  His efforts helped the Red Barons to an 8-5 record and a shot in the 1A playoffs this past season, and he leaves Gatesville having helped the team to an overall three-year record of 20-17 – each season, they went down to the wire in the Coastal 1A conference with eventual league champ, Plymouth. 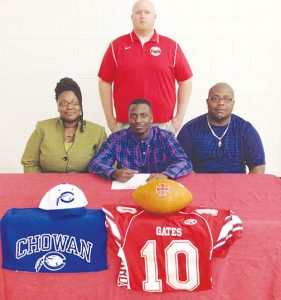 Now, despite overtures from other schools, Walker has opted to remain close to home.

“They were the school that showed the most interest in me,” Walker said in an interview last month. “I really liked everything because they showed me all that attention, and I felt like I was at home when I went there.”

The proximity of the school made his choice easy.

“Being so close to home I won’t have to worry about family having to travel so far to see me play,” Walker added. “I thought that was better for me.”

Walker says a couple of other CIAA schools were interested in signing him, including Elizabeth City State and St. Augustine’s University in Raleigh.  He says he was impressed with the Criminal Justice program that the Murfreesboro school offered.

“That’s what I’d like to do (law enforcement) as a career,” he admits with a sheepish grin, “even if I don’t make it to the NFL.”

While Walker put up an impressive array of statistics on offense, he feels that in college the Hawks coaching staff will be looking at him primarily on defense.

The 5’ 9”, 160-pounder will probably red-shirt for Coach Tim Place in 2017, and when 2018 arrives, some of his Gates County High fans could be seeing him play a new position.

“I think they’re looking at me at defensive back because of my speed,” he noted. “It’ll be a little bit of an adjustment for me, but I feel like any way that I can help the team is no problem for me; but, yes, it will be an adjustment switching over.”

One person who had no doubt about what Walker will bring to the gridiron at the next level is his former high school coach.

“He’s been a big part of our program the last couple of years,” said Red Barons head football coach Matt Biggy, who beamed with pride over Walker’s signing with Biggy’s alma mater. “He was a three-year starter for us on offense, defense, and our special teams as a kick and punt returner.

“He was a lead-by-example kid, always showing the younger guys what they needed to do, not just for themselves, but for our team to be better,” Biggy acknowledged.

Biggy also feels the adjustment from offense to defense will go better for Walker because of his work ethic. 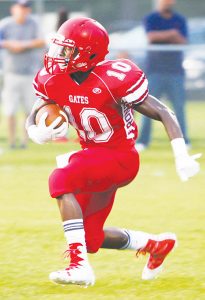 Walker rushed for over 1,200 yards in 2016 and scored 17 touchdowns on offense, defense, and in kick-returns.

“For one thing, he’s a tremendous athlete,” the coach said. “As a cornerback he was one of the best we had since I’ve been here.  On the opponent’s side of the field he was ‘shutdown’; he was very sound both for our passing defense as well as when we defended against the running game.”

Walker isn’t waiting for the spring and summer to start molding his body into college football shape.  He’s already hitting the weight room both at the high school and at the nearby Gates County Community Center.

“Since football season ended I’ve already started back conditioning, hitting those weights and trying to get better every day,” Walker said. “I know college is a whole ‘nother level of football, and I just want to get bigger and faster for that next level.”

Walker finished his prep career having rushed for 1,227 yards his senior year and collected 562 receiving yards.  He scored a total of 17 touchdowns – including five kick-off return TD’s – and on defense he made 41 tackles and had four interceptions.

“On a football team you’ve got vocal leaders and your non-vocal leaders,” says Biggy. “The non-vocal ones seem to get it right every time, and everybody sees them do it right.  Robert was a little bit of both: he could address the team when they needed it, and at the same time everybody knew they could count on him because he always practiced hard and there was never any question over what kind of effort you were going to get out of him.”