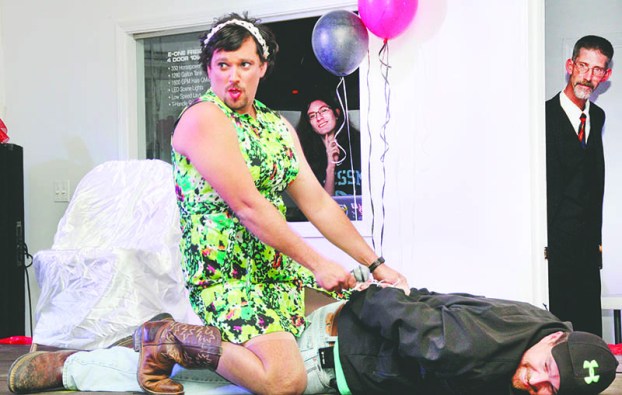 CONWAY – It’s a good thing that members of the Conway Volunteer Fire Department did not have to answer any calls Saturday evening.

If so, they most definitely would have attracted numerous stares. It isn’t every day that a fireman answers a call in make-up and high heels.

What served as a fundraiser for the CVFD proved as a delightful evening of comedy, mixed in with some good-natured hijinks, as nine members of the department took part in a womanless pageant. 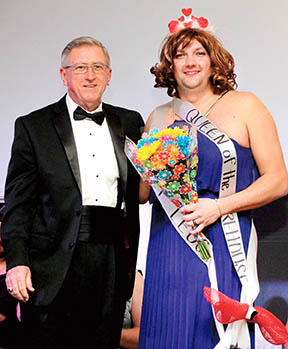 “Trixie Jo Wilcox” (Jonathan Martin) was crowned as the Queen of the Firehouse at the conclusion of Saturday evening’s pageant. “She” is shown with the event’s emcee, Joe Barrett.

When the powder of the eye shadow had finally settled, “Trixie Jo Wilcox” (aka Jonathan Martin) had won the hearts of the judges, as well as garnering the majority of the monetary donations in “her” name, and was crowned “Queen of the Firehouse.”

“On behalf of the Conway Volunteer Fire Department, we always appreciate the support of our community, and Saturday’s pageant, with a big turnout, was indicative of that support,” said CVFD Chief Albert Vann, who portrayed contestant “Sallie Mae Hoffindger.”

“Everyone I talked to after the pageant and then on Sunday and Monday said they had never laughed so hard in all their lives,” Vann added. “We had a blast, and those attending did as well.

“We thank our (CVFD) Ladies Auxiliary for all they did to put this thing together,” Vann concluded.

“What a great way to bring our community together,” said Conway fireman Bobby Bridgers, who served as one of the emcees at the event. “We appreciate all the efforts of our Ladies Auxiliary who put this event together. Our department is so fortunate to have an active Auxiliary. Those women work hard behind the scenes and their efforts help keep our department in great shape financially.”

Each contestant won a sash, judged as the best in a specific category. Those individual winners were:

With constant laughter from the audience, all nine contestants performed an opening number. They returned individually to the stage for talent and evening gown competition followed by each being asked to answer two randomly selected questions.

The overall winner was determined based on which “beauty” received the most “tips” – money placed in separate buckets, each bearing the name of the contestant. 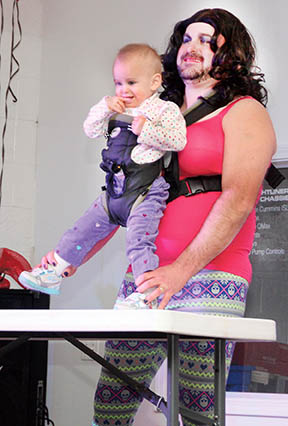 ‘Wilma Winnersbe” (Buddy Hedgepeth) uses “her” daughter, Clara, as a prop during the talent competition of the CVFD fundraiser.

Joe Barrett served as the event’s main emcee. He was subjected to sheer torment – well-placed “pinches” and kisses – by the contestants.

“This may be the craziest thing I’ve ever done,” Barrett joked. “But then, be reminded, that we reside in a non-taxed fire district and we have a lot of expenses to keep up with, including a new, quarter-million-dollar fire truck parked out front tonight that we have to make payments on.

“We thank our Ladies Auxiliary for all they do for us and we appreciate the turnout tonight,” Barrett added.

Prior to the pageant, ticket-holders were treated to a spaghetti dinner, complete with homemade dessert. Nearly 190 individuals were served.

SEABOARD – Delayed, but not deterred – those are the sentiments of a father and son as they rally to... read more