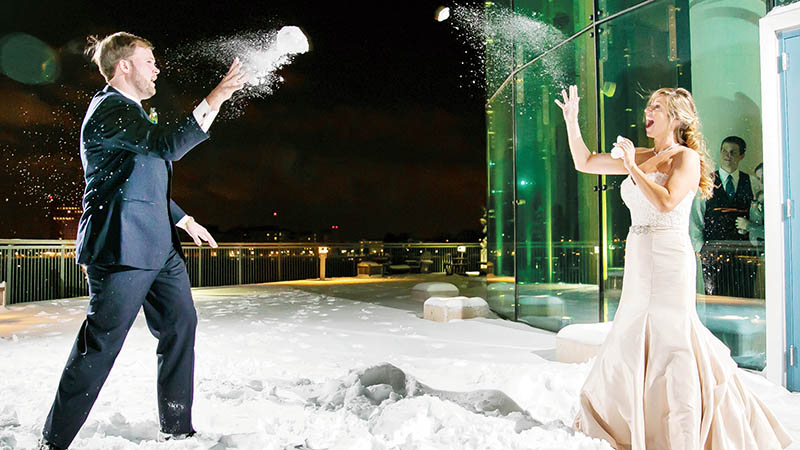 It’s rare to see newlyweds having a snowball fight on their special day, but that was the case for Matt Edwards and Nancy Pulley on Jan. 7. | Contributed Photos

AHOSKIE – When Dr. Matt Edwards kissed his new bride, the former Nancy Pulley, at the conclusion of their wedding ceremony on Jan. 7, neither knew at that exact moment that they were to become TV celebrities.

It’s not every day that a couple exchanges wedding vows during a historic snowstorm, and it’s not every day that a national television crew attends a wedding, not unless the husband and wife are part of a famous or politically connected family. But on Jan. 7, the newlyweds were the highlight of what was otherwise a dreary day – weather wise.

As the couple went about the task of planning a winter wedding, one of the first things on the checklist was to study the long-range weather forecast.

“We looked at the (Farmers’) Almanac and didn’t see any issues there for that particular weekend,” noted Matt.

They chose Freemason Street Baptist Church in downtown Norfolk as the wedding venue. That was due to not placing a travel strain on either family – the Edwards coming from Murfreesboro while the Pulleys would drive in from Yorktown, VA. The reception would be held at the Half Moone Center, located at Nauticus on the Elizabeth River waterfront in Norfolk.

“It was roughly halfway between Murfreesboro and Yorktown, plus with the major airport there in Norfolk it was convenient for family members flying in from out of the area,” Matt stated.

Everything was mapped out perfectly, with the exception of Old Man Winter’s curveball….make that a snowball.

“The biggest issue was that we had planned this wedding so that our guests could come for the day, attend the wedding and reception and then drive home,” explained Nancy. “For those who had planned to spend the night at a hotel, they were fine as things turned out, but I really felt bad for those that had to travel to and from on that day.”

Another big issue facing the couple was what if Nauticus, which is owned by the City of Norfolk, was forced to shutdown due to the winter weather.

“We had to have a back-up plan, but luckily the woman who manages Nauticus promised us that they would do all they could to remain operational and be open for our reception,” Nancy said. “They even went as far as to have snowplows clear the parking lot so that the food vendors catering the reception could access the building as well as the invited guests. The folks at Nauticus and the City of Norfolk made it happen.”

Other than the band, everyone scheduled to provide a service at the reception made it though the winter storm and arrived on time.

“We had booked The Embers (from Raleigh) to play at the reception, but I called (band member) Craig Woolard early that Saturday morning and told them not to risk traveling to Norfolk,” Matt recalled. “We found a DJ at the last minute to fill in.”

In a blizzard (14 inches of snow), Matt Edwards and Nancy Pulley tied the proverbial knot.

“We didn’t come close to filling the church, but the diehard members of our family and friends, about 60, made it,” Nancy smiled.

However, there were others in attendance who were not on the guest list.

A film crew from NBC Nightly News was in Norfolk at the same time, covering this huge weather event that impacted the southeastern United States. As things turned out, those who missed the wedding due to travel conditions were able to witness the ceremony via the network news. 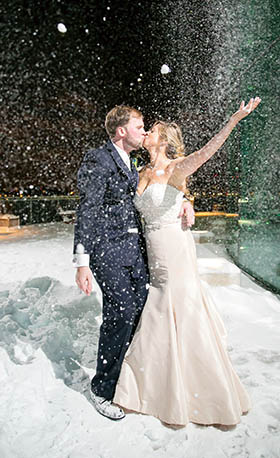 With a few flurries still falling, Mr. and Mrs. Matt Edwards share a kiss on their wedding day in Norfolk, VA.

“That Saturday morning, as I ate breakfast at the hotel with my dad and the groomsmen, this lady came up and ask if I was Matt Edwards with the Edwards-Pulley wedding party,” he recalled. “I answered yes. Turns out she was with NBC Nightly News and they were interested in showing our wedding as part of their story on the winter storm. I gave the woman Nancy’s cell number and she called to set up an interview.”

“They (news crew) came in to interview and film while I was getting my make-up on,” Nancy said.

“The crew filmed everything leading up to the wedding, us going inside the church as the snow was falling, some of the ceremony, and then finished up at the reception,” said Matt. “Of course it was all edited down to about 30 seconds of their overall story about the winter storm, but it was televised nationally that same night and another short piece aired on WAVY TV 10.”

“I don’t think I would have agreed to let a TV crew, total strangers, film my wedding, but under the circumstances I thought it was great that those unable to attend at least had a chance to see some of the ceremony,” Nancy noted. “In the end I was thankful for them being there.”

The couple met nearly two years on a dating website. Edwards is a native of Murfreesboro and, ironically, his future bride had family connections to that historic Hertford County town as well.

“On Matt’s (dating website) profile, he claimed to live in Murfreesboro, NC,” said Nancy. “I thought to myself that to be a bit odd since my mom (Jeannie Ferguson) was born and raised there. My grandfather (Fenton Ferguson) was a farmer there. I thought this guy (Matt) wasn’t exactly telling the truth so I Googled his name and sure enough he was legit.”

Nancy’s dad, Bob Pulley, a native of Smithfield, VA, also had a Murfreesboro connection as a graduate of what was then Chowan College.

“When I asked my mom about the Edwards family, particularly Matt’s dad, Scott (Edwards), she found her old Murfreesboro High School yearbook and sure enough, there he (Scott) was.”

“It was odd of Nancy’s connection to Murfreesboro,” explained Matt. “I didn’t know of her family. When we met we had a lot to talk about.”

The couple had their first date on April 11, 2015, driving separately and meeting at The Green Onion Restaurant in Norfolk, VA.

Edwards, who holds a doctorate degree from the Pennsylvania College of Optometry at Salus University, and his family own and operate Ahoskie Eye Care on Memorial Drive. His new bride, a native of Yorktown, VA, is a School Counselor in Newport News, VA. She is a graduate of James Madison University and holds a Masters from The College of William and Mary.

“I guess I’m getting ready to change my line of work,” said Mrs. Edwards. “I’m going to help out here at Matt’s office with medical records, but I still want to be involved in education. Public schools are in my heart; I feel like there’s always a need to help.”

“One of the things I’m looking at is to get Nancy involved in a community outreach of our office, getting her to perform vision screenings in our local schools,” said Matt.

What both could clearly “see” on Jan. 7 was a day that they, their invited guests, and even a national TV audience will long remember.