Brinkley signed with the Hornets on the first day of National Signing Day on Feb. 1. He was recruited to Shenandoah by head baseball coach Kevin Anderson and assistant coach Bruce Cameron.

“I decided on them because it was a small place and I really liked the city of Winchester,” Brinkley said. “When I went there the coach and the team were both very welcoming. I think I’ll fit really well there. They have a lot of outfielders leaving so they’ve said I’ll make a good fit there.” 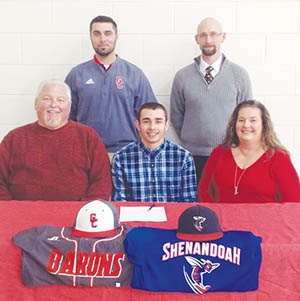 Brinkley was a centerfielder-pitcher for the Red Barons.   For his junior season (2015-16) he had a batting average of .348. At the plate he had a 65 percent QAP (quality at-bats) along with 13 runs-batted-in and 11 stolen bases. He also wasn’t too shabby with his glove, posting a fielding percentage of .939. Pitching wise, on the mound, Smith had a 2.10 earned-run-average with a WHIP (walks + hits per innings pitched) of .200, and 14 strikeouts.

Brinkley said the Hornets pursued him hard and they were really his first and only choice of a school to play for, though he did consider Chowan.

“There were a couple of other colleges that were going to try to get me to play (for them),” he maintains. “But (Shenandoah) was really all that I talked to.”

The Hornets won the Old Dominion Athletic Conference (ODAC) regular season title a year ago, and are picked to be a top team in the league this year, battling it out with Randolph-Macon. Next season, Brinkley could be arriving at a very opportune time.

“They think I can make an impact on the varsity immediately,” he says. “But there aren’t really any guarantees; I still have to show them I can do it. I’ll have to bulk up and add some size; but mostly I’ll have to be a more consistent hitter.”

Brinkley says he will major in Criminal Justice, and would like to work with the FBI, the DEA, or the CIA.

“I’m going to bring hustle, heart, and personality,” Brinkley insists. “Other than perseverance, that’s all there is to it. College baseball, I’m sure, will make me a better person.”

Meanwhile, the Red Barons were 14-11 a season ago, and shocked Williamston Riverside in the second round of the NCHSAA 1A baseball playoffs; making it all the way to the third round. Brinkley was also voted to the 1A Coastal-10 All-Conference team.

In addition to being a great student, according to his teachers, Brinkley has also played American Legion Junior and Senior team baseball for Ahoskie Post 102.

“Jordan has been a big part of developing our culture here,” said Red Barons baseball coach Jacob Harrell. “He has had an excellent career, and I’ve had the privilege of coaching Jordan since his freshman year and I’m looking for big senior year from him.”

Harrell, who earlier this year saw D.J. Smith sign with Methodist, feels Brinkley could have a similar path to college success.

“Jordan has the tools to be a five tool player,” Harrell added.  “If Jordan sticks to the process he will be an everyday contributor before he graduates Shenandoah.”

Harrell beams with pride as he sees another of his young players getting a chance to pursue their dream.

“I’m excited for him.  Jordan is going to have the opportunity to play baseball and at the same time earn his degree.  I could not be more proud of him,” Harrell concluded.

“I just want to play my regular game – both my senior year, and when I get to college,” Brinkley maintains. “I want us (Gates) to win the conference (Coastal-10) championship and de-throne Camden, Manteo, and Perquimans.”

Gates County will open its 2017 baseball season on Feb. 28 against Pasquotank High School in Elizabeth City. Their home opener will be Mar. 7 against Columbia at 4:30 p.m.