Seniors Mackenzie Brown and Ruthie Daniels closed out their home careers with 16 and 13 points respectively on Senior Night.  Teammate Reagan King was the only other Ram in double figures with 10.   Katlynn Stotesberry led Lawrence with eight.

“I’m very proud of the girls for winning the conference title,” said Rams coach Susan Oliver, who saw the Warriors end Ridgecroft’s 16-game conference winning streak back in January at Merry Hill. “Our two seniors led us on Senior Night.  Mackenzie and Ruthie stepped up tonight and led us.” 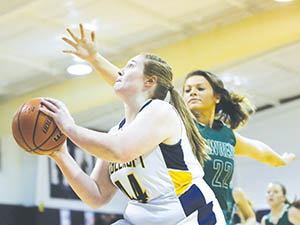 Brown was determined to make it a memorable night, scoring the first seven points of the game for her team.  Rebekah Goodwin finally got Lawrence on the board with a jump shot followed by a score from Stotesberry before Daniels got the last basket of the first quarter for the Rams, giving the home team a 9-4 lead.

The two teams exchanged baskets in the beginning of what was a sloppy quarter in the second.  Brown’s put back underneath made it 14-8.  Then after Brinson Edmondson scored inside for LAW, Sydney Lane and Brown scored the final four points of the half and the Rams headed to the locker room in front 18-10.

Sydney Wilkerson and Stotesberry scored early in the second half for Lawrence, pulling the Warriors within four, 18-14.  But then the Rams went on another 7-0 run, punctuated by Browns bucket underneath that made it 25-14, and the rout was on.  Stotesberry got one to fall before Ridgecroft closed it out with their third and final 7-0 run that doubled up LAW, 32-16 after the third.

Oliver went to a slowdown in the final frame as the Rams scored 11 of the first 13 points of the fourth; hitting five of eight from the free throw line.  Lawrence could only muster four points (a field goal and two free throws) in the end before falling by 28 as the Rams sealed the deal with the league crown.

“We moved the ball well on offense and played great defense,” Oliver said, as her defense held Lawrence’s leading scorer Lauren Baker to just a pair of free throws.

AHOSKIE – Hertford County put some distance between themselves and the rest of the field here Tuesday night as they... read more