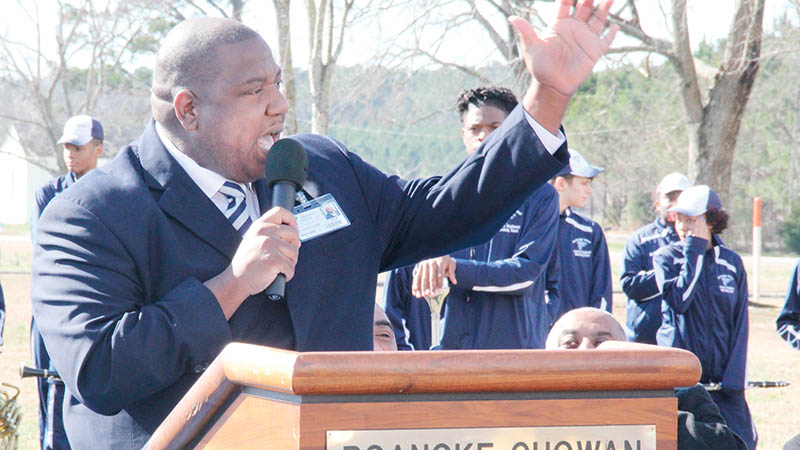 AHOSKIE – As Roanoke-Chowan Community College celebrates its 50 years of service and all the hoopla surrounding that milestone, it needs to be said that while RCCC is proud of its past, it is moving forward in an exciting new direction.

That was very apparent here Tuesday when Dr. Jimmy Tate delivered his first-ever State of the College address since his arrival on campus in August of last year.

As a huge crowd gathered outside to main entrance to the Jernigan Building, Tate unveiled plans publically of how RCCC is not only rebranding its image, but taking bold new initiatives to make the college more attractable to a larger audience.

In assessing the health of the college, Tate said enrollment numbers are making significant gains and that RCCC is improving its image within the footprint of the area it serves (Hertford, Bertie and Northampton counties). 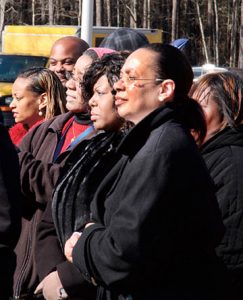 Shown here is just a small section of those who turned out to hear Tate’s remarks.

He did cite one major drawback in enrollment, saying that lack of public transportation does hurt. However, he said a plan is being developed to address that issue.

Dr. Tate also talked about making strides within other leadership areas of the college, and that an effort is now underway to raise $500,000 through the college’s Foundation.

“We, the employees of RCCC, have to take that first step towards that (fundraising) goal,” Tate noted. “We can’t ask those outside our campus to donate if we, as a college, do not first take that step.

“We will raise more than $500,000 over the next 11 months in pledges, scholarships, grants, and individual contributions. This is the biggest capital campaign in the history of the college, but we will accomplish it,” Tate added.

Tate was also thrilled to announce that RCCC was expanding its campus to Northampton County. There, college courses and Continuing Education classes will be conducted weekdays at the now vacant Northampton County High School – Creeksville campus.

Tate also promoted the fact that RCCC is partnering with Bertie, Hertford, Northampton County Public Schools for the implementation of the Adult High School Diploma Program and to offer continuing education and professional development training for teachers as required by the North Carolina Department of Public Instruction.

Additionally, the college is developing innovative programs of study at Odom Correctional Facility in Northampton County.

With excitement growing in his voice, Tate announced that RCCC will host a statewide Minority Male Mentoring Symposium on Feb. 23 to include keynote addresses rendered by Dr. Johnson Akinleye, Dr. Barry Burks, and Tawan Perry.

Tate touted other recent success stories at RCCC. He said the school is one of 10 partners in the Central Carolina Community College’s “Carolina Works” First in the World Grant with a goal and focus on increasing student retention.

RCCC, he said, has received grant funds for the TRIO Student Support Services program for another five year cycle.

The college’s Phi Theta Kappa organization earned 5 Star Recognition, making it only one of 21 chapters (out of 84) in the Carolinas Region that has achieved that lofty status.

“We have strengthened the relationship with local news media, resulting in more college coverage in the Roanoke-Chowan News-Herald and coverage on local radio stations,” Tate said, referencing community outreach efforts. “We have increased our presence in the community through placing flags and signs in Ahoskie, putting up signs in Northampton County to advertise our new site in that area, and revamping our website.

Also along the line of community engagement, Tate spoke of a recent example where RCCC conducted its first-ever Holiday Jazz Concert.

In the arena of academics, Tate said that area is moving the college to “the next level.”

“The substantive change for the Mechatronics Engineering Technology program was submitted to SACSCOC prior to the college closing for Christmas break, and we await word regarding the approval of this change,” Tate noted.

“We are also working on the third summer entrepreneurship camp for high school students to take place summer 2017,” Tate said.

“Our math department is starting a PUSH (Practice Until Success Happens) initiative scheduled to begin at the start of the second quarter of the semester to assist students in DMA courses,” Tate added.

Another upcoming event on the RCCC campus is scheduled for Feb. 14 where the HUM 115 Critical Thinking course and the Early Childhood program are hosting several children from local day cares on campus as part of a read and treat program.

“Nursing faculty are involved in interactive activities within the classroom, such as unfolding case studies, virtual simulations, and clicker activities. Also, Nursing students are going to the Gates County Community Center to interact with seniors and children, playing games, exercising, and teaching on various health topics,” Tate stated.

The RCCC President said that English faculty member Clark Wren and his students are publishing an Arts and Literature journal (to be named Aries) to be published in February.

“Students in the Human Services program are learning real-world skills that will help them succeed in their field,” Tate remarked. “These skills include helping to build a positive relationship with clients, verbal and non-verbal communication skills, effective listening skills, developing treatment plans, and observing different self-help groups within the community to help strengthen their experience in the HST program.”

Tate shared some great news about the college gaining 100 percent approval of $6 million that RCCC will receive as part of the NC Connect Bonds referendum. That money will be used on campus for:

Renovating the Davis Center and the Industrial Skills Building;

Updating the classrooms across the campus;

Building a greenhouse; and

At the close of his remarks, a new clock tower was unveiled on the lawn in front of the Jernigan Building.

“Today, under the united leadership of Victor Davidson, Keith Horne, and Jim Messer, we present the campus with an outstanding birthday gift, a clock tower to track our progress in the future, to remind us of the legacy of the college’s founding fathers, and to let everyone know RCCC is an exciting place that offers a positive learning atmosphere,” Dr. Tate concluded.