That appeared to be the warning Lawrence Academy coach Lee Hoffman was sharing with his girl’s basketball team here after Friday’s 56-47 win over Terra Ceia Christian School.

Terra Ceia came out inspired in the first quarter and played some of their best basketball early as Lawrence needed time to get their offense rolling.  The Knights spread the floor and set screens for Ashley James.  The diminutive sharpshooter responded in leading her team to a 16-14 advantage after the first eight minutes. 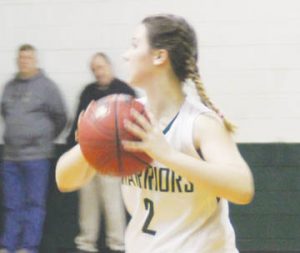 Hoffman got his team fired up in the second quarter and it showed on the floor – and the scoreboard – Baker was able to penetrate for lay-ups and the defense stepped up to force turnovers.  LAW scored seven points off turnovers and seized command halfway through the period.  However, after gaining a 10-point lead, 29-19, Lawrence went cold on defense and the Lady Knights crept back into the game; getting within seven at the mid-break, 32-25.

The Lady Warriors played the third quarter much like they did the first quarter and a half and again gained a lead of double-digits.  Baker hit some key threes, Rebekah Goodwin had a short jump shot and a pair of free throws and Rogers capitalized on a Terra Ceia turnover with a fast-break lay-up.   The Warriors doubled their lead to 14 points after the third, 48-34.

Terra Ceia opened with a 7-2 run to start the fourth and the Warriors looked in fear of letting a big lead slip away.   Ahead by just nine, 50-41, Brinson Edmundson came on with some key rebounds – she finished with 15, and LAW’s defense allowed just six more points the rest of the game.  Baker closed with a lay-up and a free throw and Edmundson capped her defensive night with a lay-up down the stretch, and the Warriors survived more than won, but remained atop the TIC girl’s standings.

It was a sloppy game,” admitted Hoffman, “but it was one of those games you just had to battle through.  I thought we’d play better at home, but it’s a win and in conference you have to win every game you can.”

Lawrence will face Terra Ceia in Pantego tonight (Thursday) in the rematch.