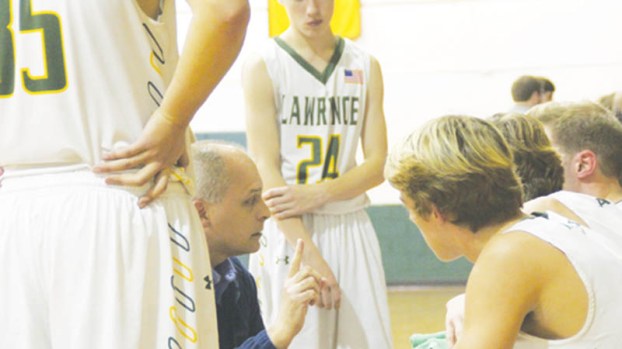 Lawrence Academy coach Jon Powell (kneeling) speaks to his team during a time-out in Friday night’s game with Terra Ceia. The Knights claimed sole possession of first place in the TIC with a 79-47 win over the Warriors. | Staff Photo by Gene Motley

MERRY HILL – When it clicks, it clicks.

The Warriors entered the game a half-game behind the Knights for supremacy, as both were undefeated in the league: Lawrence at 5-0 and TCCS at 6-0.

The Knights played like they wanted to settle this one quickly.

The game featured the return of senior wing Jarrett Harrell, who had missed the four previous Lawrence games with an ankle injury.  However, even the return of the sharpshooter was no match for the accuracy of the Knights.

Coming off their own blowout win over The Albemarle School (51-38), Lawrence showed no signs of being intimidated by the Beaufort County crew.

Then came the jump ball.

Point guard Quentin Van Essendelft scored off the opening tip, and the rout was on. Led by wing forward Tyler Hendrix, who scored inside, and the penetration of shooting guard Messiah Barnes, the Knights jumped to a 10-0 lead before Miller Trowell broke the string with a triple from the corner that made it 10-3.  Terra Ceia then reeled off nine more in a row before Harrell showed no shooting effects of his lay-off, draining a trey of his own.  However, those two three-pointers were all of Lawrence’s offense in the quarter, and the period ended with Terra Ceia in front, 23-6.

The Knights’ physical play led to fouls in the second quarter and Lawrence was able to capitalize at the free throw line, making seven-of-eleven.  Knights coach Roger Klaassen, without a deep bench, couldn’t substitute freely and the Warriors were able to get within 16 at 32-16, but despite both teams putting up 14 points in the period, Terra Ceia went to the locker room at the half ahead 37-20.

Lawrence continued to rain in the three-pointers in the third quarter, but still was in a catch-up situation.  Hendrix scored ten of the Knights’ first dozen points and had 14 of his team’s 20 in the period.  Harrell’s shooting stroke returned, and he collected eight points, but the Warriors still trailed by 22 points, 57-35, entering the fourth.

Things got a little chippy in the final frame, but there were no ejections – just a couple of technical foul calls.  Lawrence made its first three treys, thanks to Trowell and Harrell.  Miller finished with eight in the frame as the Knights (18-1; 8-0, TIC) turned it into garbage-time – winning by 32 points to claim sole possession of first.

“We don’t like slowing it down, running is our game,” said Klaassen afterward. “But hand it to Lawrence, they came at us with all they had.”

“They’re probably the quickest team we’ve faced this season,” said LAW coach Jon Powell. “We made up with our three’s and free throws, but gave up too many loose ball turnovers to do what we needed to do.”

AHOSKIE – Ridgecroft School scored the first six points of the game and kept their foot on the accelerator the... read more