“I note the obvious differences between each sort and type, but we are more alike, my friends, than we are unalike.” – Maya Angelou

AHOSKIE – In the spirit and legacy of Dr. Martin Luther King, Jr. on what would have been his 88th birthday, this Hertford County hamlet set out to commemorate the late civil rights leader with song, praise, words of wisdom and reverence.

And where better to celebrate the life of a minister – than in a church. Not a church with members of one faith, but one that was filled to capacity with a crowd as diverse as the life they had come to memorialize.

Following a march through the city on Monday afternoon, celebrants gathered at Ahoskie United Methodist Church for the annual MLK Convocation. 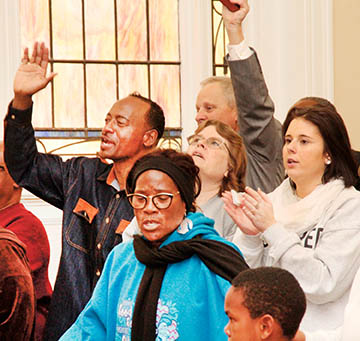 An overflow crowd inside Ahoskie United Methodist Church stood and gave praise on Monday where all races gathered to remember the life and legacy of the late Dr. King. Music was provided by the Higher Ground Praise Ministry.

“We teach in Sunday School, ‘Red and yellow, black and white, we are all precious in his site,” began celebrant Rev. C. David Stackhouse – who was overseeing his eighth Convocation. “We are here to keep the dream alive, to share in convocation this history.”

Stackhouse credited community leaders and business members within the town with aiding in the program and ideas for the 2017 celebration.

“We met together to plan this, and when Pastor (Bill) Haddock (of Ahoskie United Methodist Church) said why not have it here, I said we’re on our way,” Stackhouse noted. “As Dr. King would say, ‘no place better than right here’.”

Rev. Haddock gave the welcome invocation to the assembly.

“We met out on the streets, and now we are meeting in the Lord’s House; not built for one race, or one people, but that we can see a glimpse of heaven right here,” Haddock intoned  “Dr. King had a dream that one day we would all worship together, and so we are.”

Haddock said, like Jesus, King believed there was no difference in people because they both also loved people … we can say we’ve come a mighty long way, but we know that we have not come far enough. We must show that we love one another.”

The prayer was followed by an instrumental solo of the National Anthem by Hertford County High band trumpeter Ross Richardson.

“Thank you, Dr. King, for sharing with us your dream” she extolled. “Thank you for showing us your ambition that things can’t happen unless we move and unite, regardless of if we’re rich or poor, educated or not, we are all one nation under God.”

Joyner reminded the young ones assembled that nothing is gained without sacrifice; whether it was Rosa Parks igniting a bus boycott or the protest marches faced down with dogs and fire hoses.

“There were times we could not ride the bus,” she reminded. “But thanks be to Dr. King and others that have made it so that now we can own the bus … We have the dream now. Dr. King didn’t live to see all of the dream but we are closer than we were.”

“I have a dream, too,” she concluded. “My dream is that Dr. King’s dream will be fulfilled. Someone, whether in front of me or behind me will continue that legacy that the dream is still alive.”

The main speaker for the evening was Sixth Judicial District Attorney Valerie Asbell, who cited the examples of Jesus, King, and the late poet, Maya Angelou.

“Jesus said it and Martin Luther King certainly lived through his example,” Asbell said. “Life is hard, but so too are our duties as human beings, Americans and most importantly as Christians are also hard, my friends. As Dr. King said, there is some good in the worst of us and some evil in the best of us. When we discover this, we are less prone to hate our enemies. When we look beneath the surface, beneath the impulsive evil deed, we see within our enemy-neighbor a measure of goodness and know that the viciousness and evilness of his acts not quite representative of all that he is. Then we love our enemies by realizing that they are not totally bad and that they are not beyond the reach of God’s redemptive love.”

“We find ourselves now in the same unrest as MLK. Robert Kennedy, and Jesus Christ did,” she closed. “Let’s go forward today by focusing on the words of Jesus Christ, my Savior, MLK. Jr. Robert F. Kennedy and Maya Angelou: to love your neighbor as yourself, love your enemies, and realize that we are more alike than we are unalike; that darkness cannot drive out darkness, only light can do that. Hate cannot drive out hate: only love can do that. Recognizing our specialness, the trick is keeping the truth up front in daily consciousness, and realize in the words of Lincoln that the best way to predict the future is to create it.”

The program closed with the reciting of King’s commemoration of ‘Let My People Go’ led by Hertford County School Board member David Shields; followed by benediction from Rev. James Shearn of Jordan Grove Baptist Church in Winton.