Baker had 25 points to lead all scorers, but it was the inside play of teammate Brinson Edmondson as she battled with Ridgecroft center Mackenzie Brown all night.  Brown finished with 16 points leading the Lady Rams.

“This was a huge win for us,” said exhausted Lawrence coach Lee Hoffman. “We got a lead early and they came back; they got a lead late and we came back. It’s always a battle when we play Ridgecroft.” 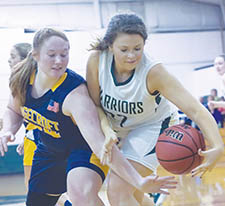 In a back-and-forth contest Lawrence roared out to a 13-1 lead thanks to four points apiece from Baker and Edmondson.  However, Brown and Ruthie Daniels came on midway through the first quarter and the pair managed to pull the Rams within five at the horn, 15-10, Lawrence.

Emma Lane’s bank shot, two minutes into the second quarter pulled Ridgecroft within two points 16-14 before Baker hit a running one-hander and added a foul shot to push the LAW lead back up to six, 20-14.  But a 9-4 run over the final two minutes of the frame accounted for the Rams pulling within one as the halftime buzzer sounded with Lawrence taking a 24-23 lead into the locker-room at the mid-break.

An early Baker three-pointer to open the second half helped Lawrence move back out to a four-point lead, 31-27.  But then Sydney Lane got the hot-hand for the Rams and Ridgecroft went on a 10-0 run to end the third quarter; first tying the game (31-31) then taking their first lead, 35-31, thanks to back-to-back buckets by Lane.  Brown’s put-back in the paint before time expired gave the Rams a six-point advantage, 37-31, and it looked like the streak would continue.

Brown made a lay-up to open the scoring in the fourth quarter and Ridgecroft had its largest lead of the night. 39-31.   The two teams exchanged buckets, leaving the Rams still in the lead, 43-36.  But Lawrence would score the next seven points over a one-minute period thanks to Baker and Katlynn Stotesbury; and, with 2:16 remaining, the game was tied again, 43-all.

With less than two minutes remaining, Daniels was fouled and made both to stake the Rams to a 45-43 lead.  But on the trip back up court, Lawrence worked for a good shot, and Edmondson got it on an offensive rebound to tie it for the last time. 45-45; she then collected a defensive rebound and Lawrence again held for a good shot.  Instead, Baker was fouled and made the one free throw that proved to be the winner.  Brown’s shot in the lane at the buzzer fell short, igniting a huge Lawrence celebration at mid-court.

‘It came down to the last-second shot like we thought it would,” said Hoffman. “What a game.”

Lawrence played Greenfield in a non-conference game on Wednesday.  On Friday, the Warriors host Halifax in another non-league match-up while Ridgecroft travels to Terra Ceia in TIC action.